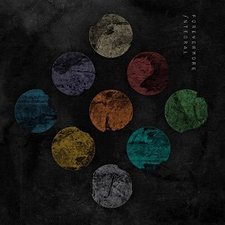 
Forevermore's debut album with Solid State, Telos, was well-received by most and features some really great metal music. Now the guys are back with their second Solid State release and are looking to continue the momentum. Integral is a concept album based in the psychological theory of spiral dynamics. The theory of spiral dynamics is set up in different levels and tiers. The colors are represented on the album cover, and the songs themselves also match up with the colors. While the two instrumentals, "I" and "Ikigai," do not match up to a set color, the other nine songs match up in order. The album questions how fundamental differences in humanity come about, and how we, as the human race, can overcome them. This is all explained nicely in the album trailer posted to Solid State Records YouTube channel.

The album takes an "immortal man" through the journey of spiral dynamics. "Nascent" (beige) opens the album with a song about survival. "Perpetual assault / unrelenting violence / With only instinct guiding me," is growled in the verse while, "Survive, I open my eyes realize space between my body and mind" is sung cleanly in the chorus. Musically, this is one of the most enjoyable tracks present. "Noumina" (purple) is up next and is looked at from a tribal/communal approach. "Overlord" (red) finds the immortal man longing for independence and the pursuit of power, no matter the cost or damage caused. The song's heaviness helps to portray this idea well. While "Overlord" sees the immortal man taking a warlord's approach, "Order" (blue) finds him searching for order and meaning in life. The lyrics circle around a fictional religious cult looking to give the man a sense of being that the band describes as an "unhealthy" version of blue. "Enterprise" (orange) continues the journey for the immortal man who now seeks personal success. The man has become prideful and unwilling to help others in his pursuit. The band interestingly reflect on how many Christians have let "orange values" creep into their blue and equate this to modern day pastors teaching an ever more present prosperity gospel. "Empath" (green) finds the immortal man recovering from his prideful orange nature and turning to be a more caring person. He begins to help the less fortunate and is angry at the orange nature. That anger clearly comes out in both the vocals and music. "We're all the same / You're no better than the rest of us" is screamed out in the verse. The guitar leads in this track are superb and complement this music nicely.

After the instrumental "Ikigai" finishes, the story finds the immortal man moving into the second tier of thinking. "Prism" (yellow) has the man continuing his journey now looking back on the past and seeing each color and stage. The man attempts to help others still in tier one, but his attempts are fleeting. He proclaims, "I see the world in every shade. I know exactly who you are and who you need me to be, but is this all for one, or one against all? "Pandemica" (turquoise) has the immortal man looking out on the problems of the entire world. From here he begins to realize that it will take everyone -- all colors -- to help to correct the global issues we all face. The title track, "Integral" (aubergine) wraps up the spiral and the man's journey in a sense. The immortal man now feels he has control, but the lyrics encourage us to continue with, "The journey never ends unless you stop seeking / Never stop searching."

The concept for Integral is a very forward thinking idea and may not be for everyone. I recommend listening to the album at least once with the band's guide and explanations provided on their website. The thoughts that run behind this record are extremely deep and far too encompassing to cover in a mere review. Forevermore's guide, however, is very detailed. While you may not personally agree with the views presented, it's certainly an interesting way to look at life, the reactions of people, and the troubles that our world faces. My biggest issue is that the theme seems to be an observation that simply encourages the listener to continue seeking. While it is important to continue seeking new ways to coexist with so many different types of people with such varying ideas lifestyles, and beliefs, it is also important to point to the One we should be seeking above all else -- Jesus Christ. It would have been nice to see the final song incorporate this message a little. Instead, the group opted for a general approach from a "man's" point of view and not necessarily a "Christian man's." This isn't in and of itself a bad thing, but it could have been a missed opportunity. Overall, Forevermore's second album can be seen as a win. The music matches perfectly with each song thematically and it sounds great to boot. The album really features a nice mix of the heavy with some technical and softer sections. Vocally, the screams, growls, and clean vocals are also on point. You really couldn't ask for much more from a musical perspective. Integral is a nice addition to this year's metal entries and is certainly one of the best to date. Check this one out, but be prepared to spend some time really delving into the band's message.

In 2014, Indianapolis metalcore outfit Forevermore released a solid and well-received debut under the Solid State mantel, titled Telos. Although it left much to be desired in the way of originality, I couldn't deny they had massive potential. Their second full-length record aims to see that potential through by the way of the concept album. Centered around the theory of Spiral Dynamics, Integral is a grandiose album in scope and vision and a fine example of good metalcore.

After the instrumental "I" establishes the atmosphere to follow, "Nascent" opens the album with impressive technicality and harsh vocals by front man Kramer Lowe, while the brutality is subdued in the melodic chorus, providing the effective dynamic needed for an album as progressive this. Other highlights include "Noumina," "Order" and "Prism," but all are worth a listen despite sounding somewhat done before.

Forevermore is definitely on their way to achieving their full potential. While the concept gives an overall greater reward than the music carrying it, Integral is another solid step for the band and one not to be missed. - 8/17/16, Lucas Munachen of Jesusfreakhideout.com

Two years ago, Solid State debuted one of their more recent signings at the time, Forevermore. Their album Telos did little to impress me, to be quite honest, but it was a relatively strong effort for a new band. Integral is their newest effort, and it's par for the course with Forevermore thus far. Not a bad album, by any means, Integral builds on their foundation appropriately with a solid mix of metal and hardcore. "Order" features Oh, Sleeper-esque guitarwork, with a traditional hardcore blend that brings to mind several bands (MyChildren MyBride being one of them); the following track, "Enterprise," is very similar, though the tempo is dropped a little, and it features a short interlude a few minutes in that turns the intensity way down. Ultimately, Integral isn't a very memorable album, but it's an enjoyable listen for both new and longtime Solid State fans. - 8/6/16, Scott Fryberger of Jesusfreakhideout.com