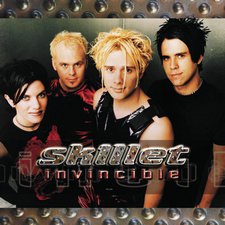 
Some bands can go through a lot of changes, some that break up a band and some that they endure. Thankfully, Skillet falls into the category of the latter. Skillet has more recently undergone some big changes. With gaining one new member and losing two core members, the band has managed to do more than survive, they've arguably made their best record to date. Invincible comes slamming at you on the heels of their previous hit, 1998's Hey You, I Love Your Soul, which was a tremendous sound change from the grunge rock of their 1996 self-titled debut. When the band altered their hard rock sound from the first album to include a more electronic, almost techno-flavored industrial rock, fans were surprised, but pleasantly. So what does a band do when they think they've found their niche'? Keep it.

But the question is, how much does the band keep and how much does the band change? In 1998, Smalltown Poets released their sophomore album, Listen Closely, which ended up being just a continuation of their debut album showing little to no growth. So is Skillet's Invincible just a Hey You, I Love Your Soul II? Hardly.

Invincible starts off with an electronic wave that sets up the album's overall feel before bursting into an electronic drum beat and crunchy guitars creating one of the album's highlights, "Best Kept Secret." The album seems to carry a stronger message throughout, tackling issues that one can more easily relate to than their previous albums. "I Trust You" and "The One" are prime examples of such songs. "I Trust You" is a fast-paced pop/rock song that presents a common problem--trusting God in tough situations. "The One" has a similar premise, presenting a slower worshipful setting, acknowledging how much we need God and how wonderful His mercy is.

Invincible seems to rock harder at times than previous efforts with such songs as "Invincible," "You're Powerful," "The Fire Breathes," and "You're in My Brain." And the band has created their best ballads to date with "I Rest" and "The One." Invincible promises to be one of the best albums of 2000 and is well worth the wait till its release in February.