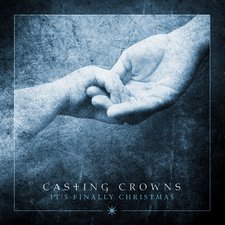 
It's Finally Christmas is an EP by the ever-popular CCM band Casting Crowns. This project marks the band's first Christmas material since 2008's Peace on Earth, and is an enjoyable listen for both fans of Casting Crowns and Christmas music in general.

In the opener, "Gloria Angels We Have Heard on High," lead vocalist Mark Hall gives an emotive performance and even shows off his falsetto chops. It's a poppy track, but doesn't have the processed, sterile sound we've come to expect from radio-friendly CCM. The message is simply about the joy of Jesus coming to earth and ultimately redeeming us. By comparison, "It's Finally Christmas" celebrates the smaller joys of the season, such as baking cookies and listening to classic Christmas music. The country-tinged tone of the song combines with the sentimental lyrics to give listeners a warm, cozy feeling, which is exactly what Christmas music should do. In "What Child is This (Christ the King)," vocalist and keyboardist Megan Garrett takes the lead, singing an adaptation of the traditional carol with a new chorus. Although purists among us will wonder why they changed the melody, the spirit of the song is the same. The lyrics convey the same message, but in modern English. Instead of "Haste, haste to bring Him laud," Garrett sings, "From our hearts our praises ring." Though the chorus gets a bit repetitive, the overall song is a nice rendition with tasteful mandolin and violin parts.

"Somewhere in Your Silent Night" kicks off the latter half of the EP and is easily the best song of the six. Apart from being beautiful, with a soaring chorus, it directly addresses the people who are unhappy at Christmastime and reminds them that Jesus hasn't forgotten them. In the chorus, Hall sings, "Somewhere in your silent night / heaven hears the song your broken heart has criedjust lift your head for love has come to find you." The clincher, though, comes in the bridge: "Emmanuel will meet you where you are. / He knows your hurt / He knows your name / and you're the very reason that He came." In short, Hall's lyrics reflect the irony of the Christmas season. Culturally, this time of year is often oblivious and unsympathetic to hurting people, but its true subject deeply cares for the brokenhearted (see Ps. 34:18). "O Holy Night" is another pretty carol rendition by Megan Garrett that highlights her silky voice. Thankfully, this version includes the verse, "Truly He taught us to love one another," which is often ditched by pop artists. The final track, "Make Room," is a retelling of the Christmas story, from Mary and Joseph finding no room in the inn, to the angels telling the shepherds the Good News. Musically, it's a standard ballad, though the three-part harmony between Hall, Garrett and special guest Matt Maher is a definite high point.

Overall, It's Finally Christmas is a solid EP that will likely fit well between the usual hodgepodge of carols and contemporary Christmas favorites.