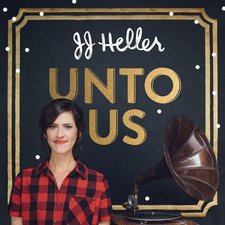 JJ Heller
Unto Us


24 years ago, Amy Grant released her landmark holiday effort, Home for Christmas. Though Grant had released a Christmas album once before, it was this second effort that would become the classic, and even though Grant would continue to release Christmas albums through the years (including another new one this year in 2016), Home for Christmas is unmatched among her body of seasonal work. In the process, it's been implanted into the memories of thousands, and JJ Heller is among them. It was surely time for Heller to piece together a full-length Christmas album, and one Kickstarter campaign later, Unto Us is the result.

In some ways, Christmas albums are hard to critique because everyone has certain expectations of what certain Christmas songs are supposed to sound like. Take "Winter Wonderland," for example; is this supposed to capture a lively jaunt through the snow, or a slow walk for pontificating? Heller leans more toward the latter, and it introduces Unto Us as a spiritual successor to Amy Grant's Home for Christmas and the other peaceful and tender Christmas efforts before Heller's. This is especially in the inclusion of "Jesu, Joy of Man's Desiring" that leads into the simple acoustic rendition of "Silent Night."

Longtime producer Ben Shive returns here, who helps shape the album's mellowness and character. "I'll Be Home for Christmas" is a real highlight, as it speaks to the tune's true melancholy nature well, and "O Little Town of Bethlehem," despite the otherwise pedestrian delivery of the verses, features a new chorus that actually elevates the entire song. At the same time, however, "Let It Snow," "Have Yourself a Merry Little Christmas," and "O Come, O Come Emmanuel" are pleasant enough, but aren't necessarily real standouts (though with oft-covered classics like these, fresh arrangements are a unique challenge).

Thankfully, Heller leaves out selections like the Grant's sappy "Grown-Up Christmas List" and Brenda Lee's tiresome "Rockin' Around the Christmas Tree" from her own collection, and instead includes some agreeable originals alongside the traditional favorites. "Christmas Is Here" and the title track feel mostly on-par with Heller's songwriting leanings, but with some Christmas bells and children's choirs included, they make good showings here. The bouncy "Oh, To See Christmas" includes a bit of She & Him influence and retains the childhood wonder of the holidays. The lullaby "Count Your Blessings," from the classic film White Christmas, is a quintessential selection, and it provides a great antithesis to the spirit of "stuff" that the secular side of Christmas tends to bring out (as an aside, some artists include covers of "My Favorite Things" from The Sound of Music in their Christmas collections, and it needs to stop).

Unto Us is clearly an effort from Heller's heart rooted in Christmas tradition and memories, and that alone makes the album a victory. Some tracks are more refined than others, and time will tell whether or not Unto Us becomes an annual tradition, but as a tribute to the Christmastime spirit rooting in the gospel, JJ Heller's effort is among this season's finer offerings.