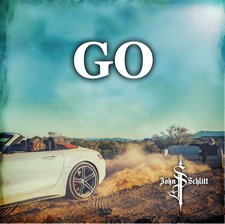 
John Schlitt is the very definition of "industry vet." Getting his start in the '70s with Head East, he found a home after his conversion in the world of CCM as the front man for Petra, joining in the late '80s and taking the band to its initial retirement in 2005. In the mid-90s, Schlitt branched out with a pair of solo albums and didn't make another solo release until 2008's The Grafting. After that, he pumped out two more solo albums along with a pair of records with side projects. After a little break, Schlitt returns with Go, which enjoyed a small release in December 2019 but is now available in a wider capacity.

Musically, this record feels similar to 2012's The Greater Cause, with a more southern rock flare. However, Schlitt pulled in a wider array of writers to contribute to the project and the sonic palette is more diverse. "Just Let Go" contains a bridge that almost sounds Queen-like in its execution. "Where Would I Be" plays out like a gospel rock song, complete with a backing choir. "Find A Way" feels like a throwback to the folk scene of the '70s but produced in a way that could have made it a ballad in the '90s. In fact, several of the songs feel like Schlitt is tapping into his varied musical past. The title track could fit in with Petra's acoustic album Double Take, while "Fake News" hearkens back to rock tunes from the early '90s. It all works to layer the sound and make the album a fun listen. What works best here is that it doesn't just feel like Schlitt and a bunch of studio musicians; it feels like Schlitt and all his friends coming together to make a fiery rock record.

On the lyrical side, there are some speed bumps that hamper Go. Most of the lyrics are fine, but none really stand out with a gripping metaphor or clever wording. They are encouraging and convey the album's themes well, but they're not very memorable. Some of the wording comes off awkwardly, such as this line from "Fighting the Fight": "You know the doubts I doubt." I get what he's saying, but it does sound like he has doubts about his doubts. The most cringe-worthy track is "Fake News," which tries to use a Russian roulette metaphor that doesn't quite land. There's also too many uses of the phrase "I don't care what they say" or its equivalent. Schlitt's trying to present himself as a seasoned rocker who still has gas in the tank, which is great, but there's only so much cliché defiance that one can take. However, there are occasional bright spots in the lyrics, like the verses of "Time Keeps Rollin'," or the various bites of insight like this from "Not Dead Yet": "As I look at you, I wonder just what I'll find/Do you have a plan - or do you just criticize?" Schlitt coming off as a wiser, older mentor is appealing, but the word craft employed in that endeavor needs more work.

Where the lyrics may fall flat, the theme comes out loud and clear. With a title like Go, one may think it's missional in its messaging. One could take that away from it, but one could also interpret these songs as general anthems to get the listener to do something with his/her life. The most surprising aspect of this record is some of the vagueness in the lyrics while the message is pretty easy to pick out. Take the title track; one listen and you know what Schlitt means. But sit and think about it, and you'll find you can apply it in multiple directions. There are tracks that talk blatantly about God and any fan of Schlitt's will know his faith courses through each tune. Still, many of these tunes feel like pep talks to an apathetic millennial who needs to figure out where their life is going. Then again, it could also be encouragement to middle-aged listeners to not give up on life even as they age. That is the beauty of how the songs on this record present themselves and strike a subtle ambiguous balance that most Christian artists struggle to find.

Personally, I've found Schlitt's solo work to be hit and miss. Each album contains memorable standout tracks but also bear along bland or skip-worthy songs. Go is no different. It does have a little more pep and fun in it than what he's done since leaving Petra, but it suffers the same as its predecessors. There are plenty of bright spots and plenty of pot holes. Overall, though, it is a fun and energetic listen that fans of old school rock will enjoy and almost anyone can walk away with a valuable lesson to digest. Schlitt seems determined to keep going and, with some stronger lyrics, that's just fine by me.