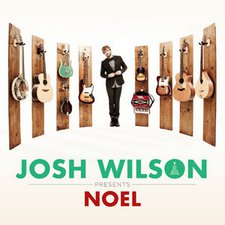 
One only has to look at the front cover of Noel, which pictures Josh Wilson surrounded by a veritable cornucopia of acoustic and electric stringed instruments, to suss out that he's probably no slouch when it comes to playing a guitar. And one only has to listen to a few seconds of the nimble-fingered, harmonic-laden fret work of the dazzling album opener, "The First Noel," to see that they were right. Harking back to stellar acoustically-based holiday efforts like Andrew Peterson's Behold the Lamb of God and Steven Curtis Chapman's 1995 triumph, The Music of Christmas, the pseudo-title track serves as a sort of opening shot over the proverbial bow to alert listeners that they would be well served to stand up and take notice of that which follows.

And, for the lion's share of the record, Wilson makes good on his promise. His sparkling guitar work, along with soul singer Mandisa's emotive, crystal-clear vocals combine to make "Go, Tell It on the Mountain" a breezy slice of syncopated holiday joy. The primary melody of "Carol of the Bells" is carried on, of all things, a banjo, which, despite the less-than-obvious choice of instrumentation, works splendidly. Wilson outfits "Angels We Have Heard on High" with a sprightly country/bluegrass groove that plays out just as marvelously. And "Almost Christmas" puts forth a winsome slice of Beatlesque pop, run through a '70s soft-rock radio filter, which, perhaps more than any other cut on the release, captures all that is truly exciting and joyful about the Christmas season.

An undeniably magnificent way with strings notwithstanding, Wilson's fret-based prowess is hardly Noel's only draw. His restrained, yet stirring, vocals on "Do You Hear What I Hear?" are an object of subdued and reverent beauty. "O Come, O Come, Emmanuel" would still stand as a sublime, minor-keyed masterpiece even without its driving instrumental accompaniment. And the depth, scope and insight of Wilson's songwriting ability are nowhere more evident than on the Andrew Peterson-assisted "Once a Year," which ends the proceedings with a moving piano-driven exhortation not to tuck the spirit of charity away, along with the artificial tree and this season's Christmas cards, once the new year rolls around.

The album is a bit skimpy length-wise, timing in at a relatively brisk 36 minutes. And one or two tracks, such as "Jesus Is Alive" and "Christmas Changes Everything," seem virtually destined to get lost among the swarm of like-sounding, and largely generic, pop/worship fare that dominates inspirational radio. That being said, these compositions, along with two other Wilson originals, populate nearly half of the record, which speaks volumes toward the talented Arkansan's willingness to allow his latest project to rise or fall, to such a sizeable extent, on the merit of his own songs -- songs which, along with his stellar renditions of the above-mentioned holiday classics, serve as a culmination of sorts of the latent potential which was only intermittently displayed on his first three releases.