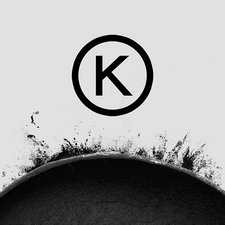 It was almost two years ago when Justin McRoberts began the ambitious CMY(K) project. After the triple EP collection came to a close in February of 2012, we had been given a total of 15 brutally honest reflections on faith and struggle. Desiring for a more significant closure to this intimate endeavor, Justin McRoberts took to Kickstarter and raised the funds for K. Seven songs were plucked from the EP's and redone with a full band, as opposed to the acoustic versions found on C, M and Y. Those seven songs were then packaged alongside three new recordings close to Justin McRobert's heart.

The seven reimagined tracks all sound considerably different than their acoustic originals, so it doesn't feel like retreading the exact same terrain. The sound is more accessible than before with the full band, which will surely broaden the appeal to a wider audience. Given the dark lyrical tone of many of the songs, though, the more upbeat music drastically lessens their impact. For instance, "Must Be Hell On You," one of the more upbeat songs on the album, is about a friend losing their faith. Some listeners may appreciate the new sound, while others might miss the message entirely the first time around. Regardless, all of the old songs are redone nicely and sound polished. "Diseases That Have Cures" is perhaps the biggest departure from its stripped down version on M. "Stay With Me Jesus" benefits the most from the new sound, slowly building tension throughout the song to a satisfying and chaotic finish. To gain a better understanding of the material and what inspired each of these songs, you can purchase, CMYK: The Process of Life Together, to read alongside the album. This companion book collects letters, lyrics, essays and artwork all related to the songs featured on the album. This adds another layer to what is already a deep, meaty project.

The non CMY(K) tracks include two hymns and one cover. McRoberts chose these songs in particular due to their impact on his own faith journey. "Pass Me Not" and "God Be With You," the two hymns, are nicely placed to provide a break from the emotionally heavy first half of the record. These songs are done well enough, but are ultimately forgettable next to the array of highly personal songs found on K. "My Eyes Are Dry" suffers similarly, especially considering its short running time of just under two minutes.

Fans of the CMY(K) project may want to look into this album, as it provides some new, energetic takes on some of the best songs off the EPs. For those new to the works of Justin McRoberts, this is a fine place to start before moving on to the superior C, M and Y EPs. It should be noted, that there are few artists willing to tackle these harsh truths about religion, faith and doubt. In an industry that is packed full of redundant praise songs and undistinguishable, radio-friendly pop hits, this artist stands out. As the CMY(K) project reaches its conclusion with this release, other artists should take note of Justin McRoberts' courage and honesty.

Following in the wake of the stripped-down, acoustically-driven C, M and Y EPs, the full-length K effort includes seven re-recorded tracks from those projects along with cover versions of traditional songs that have inspired McRoberts over the years. Despite the new album's full-band treatment, harder-edged style and more fleshed-out production, it bears, at best, only a passing resemblance to that which the average music listener might label as pop music - which, as it turns out, actually winds up being one of the project's strongest selling points. Indeed, it is the record's very mixture of folk, Americana, progressive rock and noise pop that render it so ear-catchingly unique. In their favor, the reimagined EP cuts do gain a sense of urgency and breadth in the electrified format, and the covers, which feature a pair of hymns and Keith Green's 1978 classic, "My Eyes Are Dry," do provide the occasional glimmer of light amidst his often unrelentingly stark portraits of the human condition. In fairness, though, parts of the new record come across as slightly too dissonant or meandering for their own good, and the covers tend to slot in a bit incongruently alongside the original material. Indeed, as engaging and well-constructed as K is (and it most certainly is), the C, M and Y EPs remain the preferred first point of entry when it comes to exploring McRoberts' latest batch of songs. - Bert Gangl, 5/3/13