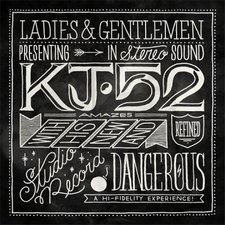 One of the busiest and best in the Christian hip hop world is back at it. For almost a decade, KJ-52 has been dropping new music almost every 18 months and it's always solid. So, what's new this time around? Not a ton, but "if it ain't broke..." This release is filled with Christ-driven themes, fun-laced flavor, and sweet beats that are worthy to played at any house party. That being said, KJ does stray a little bit from his usual album from time to time on Dangerous, but just enough to keep things from playing it too safe.

The album opens with the solid "It's Going Down," which features one of the many collaborations listed. As you listen, you'll catch Canton Jones, Lecrae, This'l and many others filling up the guest spots. This particular song has typical KJ lyrical content, but the beats travel from funny pop sounds to the dance club variety. You'll catch those same stellar beats working well on "Go" and "Superhero." Another noticeable change on Dangerous is the actual singing done by KJ himself. The rapper lays down some nice vocals on the title track as well as "Brand New Day." Both show off KJ's creativity while hitting on themes of focusing on God and the idea of what change tomorrow can bring.

From there, however, it's back to familiar territory. "Facemelt" carries a TFK fun rock vibe while "They Like Me" is just plain ol' good hip hop about the greatness of our King. The humor is prevalent on "Do The Bill Cosby," where KJ declares that this is "my dumb dance song" after he gives a shout out to Zach Morris. Characteristic of KJ, the track keeps the fun on the forefront. The production is best highlighted in "Speed That Light" and "That Was My Life," where the message is sent home strongly again about the need to spread the Gospel and the change we can grab a hold of thanks to our Savior.

It is hard to find fault in any particular track, but not every song on the twelve song album is stellar. Dangerous may not the best album he has ever released, but may paradoxically be the one with the least amount of flaws. You'll find some creative changes thrown in with our standard KJ fare, all laid over lyrics that can help any young person through the hard times in life. Dangerous is definitely worth picking up the day it drops.

KJ-52's latest album is called Dangerous and shows evidence of KJ's artistic growth. The beats are noticeably less poppy than usual, but also lean a lot more heavily toward club beats and rock music than previous albums. Tracks such as "They Like Me" and "Speed That Light" fit the club bill pretty well, while "Facemelt" and "Shake 'Em Up" contain music you might hear from a band like Red. With guest appearances including the likes of Lecrae and Thi'sl, it's no surprise that a good portion of the beats feel like they could've come off of one of their albums (though Thi'sl shows up in the rocker "Shake 'Em Up"). Lyrically, not a whole lot has changed; he's still the same KJ you've grown accustomed to. His is a message full of hope in Christ and humility in his acknowledgement of the sinful past he came from. He uses his broken past to offer hope to his listeners, such as in the made-for-radio title track (where he actually sings the chorus), encouraging them to let go of the mistakes they've made before and accept the love, forgiveness and salvation that Jesus so freely offers. Of course, he has his silly side too, as he introduces the listener to his new dance in "Do The Bill Cosby." It's one of his novelty songs that, in the end, doesn't really add anything to the album, but those who have always enjoyed his goofy side will definitely get a kick out of it. KJ's apparent growth is respectable and appreciated, with tracks like "They Like Me" and "That Was My Life" leading the charge of stronger tracks. The weakest tracks are the aforementioned "Do The Bill Cosby," and the album finale "Go." For "Go," KJ takes the weakest track from Hillsong United's Aftermath (also entitled "Go"), gives it a dance beat, and adds some raps. It's essentially a dance remix of the song; imagine if Family Force 5 remixed it for their album III, and you have an idea of what the finished product sounds like. All in all, Dangerous isn't a brilliant hip hop album, but it's one of KJ's best to date. - 3/22/12, Scott Fryberger of Jesusfreakhideout.com