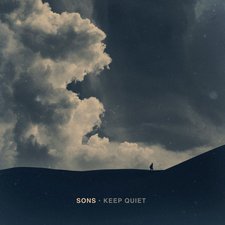 A quick history lesson: in 2010, indie rock band Sons of God finally officially released some music in the form of a three-song EP called The Genesis Prologue. They signed to Come&Live! and gave the EP away for free. Later that year, they launched a Kickstarter to fund their first full-length, which was successful, and they began to record. Somewhere in the middle of 2011, the band made an announcement; not about new music, but that they would from then on be known as SONS.

Fans became even hungrier for new music, which they knew was coming soon when SONS announced that they had signed a contract with Slospeak Records. After going on tour with sosaveme, SONS finally announced the coming of their first full-length record, Keep Quiet, which would be released on Valentine's Day of 2012. The news was warmly-welcomed, and SONS' fans began the countdown.

The first single from Keep Quiet is a redone version of "Doubt" from The Genesis Prologue. The song was arguably the best song of the three, and its placement on Keep Quiet is excellent. The production is noticeably cleaner, and they added a little instrumentation to make it sound even better (for instance, the second verse contains some added guitar work). "Caution" is also redone, and is given a bigger instrumental section. They've also slowed the tempo down a bit, which subsequently makes it about a minute longer. The rest of the songs are brand new for this album, and they display several different sides to the band. The opening track, "Masters of the Flattery," is a rocker like something you might hear from Blindside (musically, that is). It has an energy that gets you going right from the start (and vaguely sounds like "Supernatural" by dc Talk). SONS also gets rocking through songs like "Retribution" - which features some heavier guitars - and "Under the Sun," which reminds me of bands like Chevelle.

A good portion of Keep Quiet tends to, well, keep quiet. While these Tennessee boys know how to rock, they also experiment a lot with softer indie rock and the occasional ballad. There aren't any acoustic segments, but tracks like "Keep Quiet" and "Caution" have a much slower tempo, with ample use of piano and some softer guitars before jumping into rockier material. "Sea of Glass" is about as close as SONS gets to an acoustic song; it's slow and tame, with the least amount of percussion of any of Keep Quiet's tracklist. "Sea of Glass" is also the album's most worshipful song. Vocalist Aaron Newberry imagines entering the throne room of God (as described in the book of Revelation), and asks God's glory to fill the skies.

Speaking of lyrics, they're pretty solid. Not only does Newberry's love and humility shine through what could be considered darker lyrics, he's also good with words. "Under the Sun" is a good example of the humility, as he sings "We've got this way about us that leads me to believe we're just naive and searching for something." He continues on into the chorus, saying "I'm just a man living under the sun, just a poor imitation of my King that's to come." The following song, "Ghosts," is humility at its finest: "You could be forgetting how to breathe, or I could be sucking the life out of you" (by the way, I absolutely love the melody of that line, especially combined with the vocal effect used on that line near the end of the song). A couple songs ("Masters of the Flattery" and "Is This A Dry Season or Agnosticism?") both call out unwarranted fickleness in the Church; the latter of the two says "We worship God on Sundays, using the weekdays for the fall, the church's budget overflows while poverty persists." Convicting lyrics.

The Genesis Prologue whet our appetites for this full length so much; those three songs alone were great, and it was easy to see that big things were to come from this band. I'll admit it took me a few listens before I really began to get the full enjoyment out of Keep Quiet, but it surely delivers. SONS is a talented rock band, and there's no doubt indie rock fans will find a lot to like about Keep Quiet. And their partnership with Slospeak should only lead to bigger and better things. If you're not familiar with SONS, expect driving rock with some ambience and some honest and passionate lyrics. For fans of Manchester Orchestra and Chevelle.

After two years with nothing but a three-song EP to live off of, fans are gearing up for the release of Keep Quiet, the first full-length release from rock band SONS. Two songs, "Caution" and "Doubt," have been taken from their EP and redone for this release (sounding cleaner and more refined in the process), and the guys have crafted ten brand new songs that will keep you coming back for more. Keep Quiet is a satisfying batch of songs that will appeal to fans of indie rock acts like Manchester Orchestra. Unlike The Genesis Prologue, this will not be a free download, as SONS is not releasing Keep Quiet through Come&Live!; but you should be prepared to fork over the ten bucks. Look for it on Valentine's Day from Slospeak Records... - PReview date: 1/29/12, written by Scott Fryberger of Jesusfreakhideout.com --->