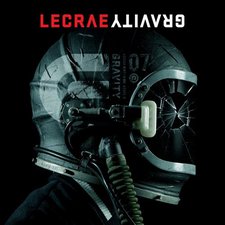 Lecrae has been very prolific over the past two years as he released two full-length albums and a mix tape leading up to his latest LP, Gravity. Crae shocked some folks with Church Clothes and the controversial title track was an honest and needed look at today's church. From there, one could only guess where he would go next. With Gravity, Lecrae turns back the clock a little with songs that more closely resemble Rebel as a whole. There aren't any club songs on the album like found on the two Rehab albums, but there is some R&B featured here and there, such as the album's closer, "Lucky Ones."

Lecrae starts things off in an explosive manner with the hard-hitting "The Drop (Intro)." There is no doubt that this track will have your head bobbing to the beat in no time. If anyone has been questioning whether or not Lecrae still has it, all doubts should be erased after one listen. The title track, "Gravity," features the soulful voice of JR on the chorus, but finds Crae painting with a seemingly broad brush about police corruption as he claims, "My onus is to keep the police from ridin' all up on us" in the opening verse. It's unclear as to why it has become his obligation to end the apparent widespread police corruption, but the song begins to sound reminiscent of some secular "the police are out to get us" songs.

Following the slower "Gravity" is the solid Novel-featured "Walk With Me." The song has a great groove and features one of the best lines in the album as he raps, "Ah, I'm on a mission, they probably think I'm missing some screws, but it's these three nails that keep me driven. If God ain't with me I know that I'm gonna fail" The next song of note is "Falling Down," which features Trip Lee and Swoope. Trip kicks the joint off and helps to make the track stand out as memorable. Immediately after is this reviewer's favorite track, "Fakin'." Thi'sl's guest spots always bring a smile to my face and his spot here is no different. The first two verses focus on "wannabe" gangsters, but shifts focus a bit for verse three as Lecrae prays, "I turn to the Father. I'm praying, Lord, forgive 'em cuz they lyin' like Mufasa" and "I pray the Lord save 'em before He drop 'em."

Skipping forward several tracks to "Power Trip" will get you to the next song that really stands out. PRo, Sho Baraka, and Andy Mineo are all featured on this one and another lyrical bright spot appears in the opening verse with, "The lust for power go to your brain if you let it. You say, 'What up dog?'; I hear god, I'm so dyslexic." Next up is "Lord Have Mercy" featuring Tedashii; the song is easily one of the album's best. If you have a good system in your car you're going to want to crank this one as the bass hits hard throughout. Tedashii's guest spot turns out to be one of the best on Gravity and you will find yourself wanting to bump this track over and over again. "I Know" is a Lecrae solo track and is the last real noteworthy track on the album.

As a whole, Gravity resembles Rebel more than any of his previous works. With that being said, Gravity isn't quite up to the level of Rebel. While it is refreshing to see Lecrae stay away from the club songs and stick to straight-up hip-hop and rap mostly, several of the songs just seem to fall a little flat. About half of the album is really special while the other half is decent. I wouldn't say that the other songs are forgettable, but this is a disc you will more than likely find yourself skipping through each time you listen. Whether you call him Lecrae, Crae, or Creazy, he has released another album of solid Christ-centered material. While it may not be his best work to date, there are enough tracks that demand your attention to warrant giving Gravity a listen.

Creazy is back, and for the first time in quite a few years, I can say with confidence that Lecrae is reaching his full rap potential. I haven't really enjoyed much of his stuff since Rebel came out, due to the lack of actual rapping involved. It seemed that Lecrae tried to be overly creative and ended up falling short in the process. But then Gravity came out, and he's back to what he does best.

The album starts banging with "Intro" and the beats stay hot all the way through. Many tracks offer stellar rhymes and a slew of guest spots with the likes of Trip Lee, JR, and Tedashi all guaranteed to please hip hop heads. "Falling Down," "Power Trip," "Lord Have Mercy," and "I Know" are simply triumphant in both sound and lyrical content, making for amazing rap tunes. Not every track is a standout, though; the few spots of R&B pale in comparison to the other tracks stylistically and are not necessarily needed. Lastly, "The Lucky Ones" is an ultra-creative joint with pace changing goodness and lyrics that remind us how lucky we truly are, and the end result is a perfect song.

All in all, the album is solid and Lecrae is back to simply spitting Christ-driven tunes. The rapping is tight, the production is on point, and the message hits home. Go out and pick up Gravity the day it drops. - Kevin Hoskins, 8/28/12