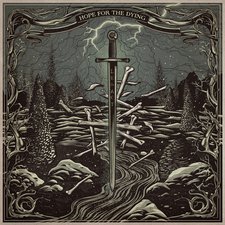 Hope For The Dying
Legacy


In a metal world full of sub-genres, Hope For the Dying just feels like one of the few legit modern metal bands out there. There is no "core" genre attached to the music they make (although one could argue for a prog-metal label). It's simply just heavy music with absolutely shredding guitars. They lean towards a symphonic element, but their music is based in classic metal. Dissimulation won many over as a seamless album that featured extremely talented individuals. Now the band is back with their third label release in Legacy. It's an album title that's quite fitting as it could be a record that could cement the young band's legacy as metal stalwarts already. All of this is topped off with a very Game of Thrones-like album cover.

Aletheia was a step away from Dissimulation, but Legacy brings that first release vibe back. The record has a very similar flow as the debut and songs are tied together by short interlude-type introductions. "Aurora" opens the album with a minute-long instrumental that leads directly into "Setting Sun," which sets the tone for the outing. The secondary music, an extremely haunting organ/keyboard, almost outshines the guitar work. That song runs directly into to one of the album's best and most diverse tracks, "Flamed Forged." It's not until "Nemesis" that there isn't a slick transition in place. Instead, the relentless barrage of "Narcissus" ends mashed into the beginning of "Nemesis." The change is a little harsh, but it works as the dissonance of each song complements each other. In the song, the line "I was a slave to my own demons," stands out earlier and gives credence to the title. The song ends with a huge guitar dive-bomb that would make Mr. Van Halen proud and leads to a brief orchestral moment that goes directly into the symphonic-heavy "Trenches;" another fantastic number. "Trenches" slows dramatically at the end, and "Wretched Curse" picks up immediately. It's not until now that you can really catch your breath. No quicker than you settle into a brief lull does "Wander No More" rip you out completely. It's very possible that the blazing guitars make it this reviewer's favorite song. The title track is the next gut-punch and comes in after yet another smooth transition. The song is the album's longest by 30 seconds at 9:16. The music features a very smooth, and nearly two-minute-long, interlude (starting at 3:36) that snaps out with an in-your-face type guitar lead. Things finally slow back down to soft strings at the end as it transitions to the very triumphant sounding "Adamantine." The final foray recaps all the things that make this a great album -- highlighted mostly by the excellent musicianship. The album, which clocks in at about one hour in length, fittingly comes to an end with a solo piano playing a few soft notes.

Dissimulation was sheer brilliance, but it's possible that Legacy may be even better. With each listen, you pick up a new layer or nuance. The ear and creativity that this band holds goes nearly unrivaled. They have a unique ability to string an entire album together as a seamless and neverending experience. The music also features great uses of timing changes, impressive interludes in the middle of songs, and a solid mix of straight-up metal and orchestral arrangements. The Christian metal scene suffered greatly last year with an overwhelming number of lackluster releases. Hope For the Dying gives 2016 an excellent start to the heavy music genres. If you've been passing on Hope For the Dying previously, or have preferred their debut to their second release, Legacy is an album you won't want to pass over. As a lover of metal who has become tired of the of the repeated sounds, Legacy offers something fresher. This one is well worth your while.

The newest Hope for the Dying album, Legacy, is simultaneously an almost-great work of metal artistry and a cautionary tale on the dangers of half-measures. At its core, the music of Legacy is a powerful mix of metalcore heft and prog metal intricacy that keeps things diverse and interesting, while also being just a bit too derivative at times (the opening minutes of "Flame Forged" might be the most blatant Opeth rip-off I've ever heard). Unfortunately, the band chose to dabble in folk metal as well, and that's where things start to go off the rails. Instead of really leaning into the atmosphere that genuine folk instrumentation can create, the band chose to synthesize everything. This album is chock-full of synthesized strings, synthesized horns, and other electronic tomfoolery. This does a major disservice to the otherwise excellent metal foundation of the music, at times causing the album to sound more like a video game soundtrack than a serious work of music. It's no surprise then that the best tracks on the album, like "Nemesis," are the ones with the least amount of synth effects. Interestingly, an actual real violin does pop up at the end of "Trenches," and it works very well. It makes one wonder what could have been if the compelling metal bedrock of Legacy had been matched with the genuine folk musicianship it deserves. - Review date: 3/8/16, Timothy Estabrooks

Progressive metal is a tricky genre. When efforts to embrace creativity inherently border on dissonance, the temptation is to settle for simplicity and, in so doing, target a broader audience. At every turn, the lure is compromise; Legacy does not offer any such concession. The newest effort from Hope For The Dying is excellent, building upon the band's previous accomplishments, especially in relation to song compensation and orchestral integration. For the reader with an ear for heavy music: do not let this release go unheard. - 3/4/16, Jeremy Barnes of Jesusfreakhideout.com

With Hope For The Dying's highly-anticipated album Legacy, the band aims to solidify itself as one of the defining forces of the genre. As is the standard for a Hope For The Dying album, you never really know what kind of musical surprises lie around the corner. Technical musicianship? For sure. Some of the finest in modern heavy metal? Count on it. Starting the album with layers emphatic trumpets that sound like King David leading his army into battle? Middle Eastern-esque music that vaguely reminds me of the Arbiter's Grounds from The Legend of Zelda: Twilight Princess? Intermittent acoustic and orchestral sections, sometimes standalone and sometimes perfectly blended with the metal? Well...bring it on! There's plenty to enjoy here, as it's not only stylistically versatile, but the songs are long and meaty, as well. Legacy will most likely go down as one of the best metal albums of 2016, so make sure to jump on your opportunity to pick it up. - 3/5/16, Scott Fryberger of Jesusfreakhideout.com