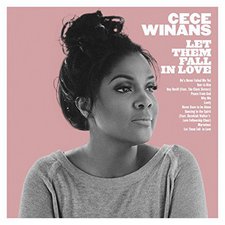 
There exists a particular kind of quandary for established artists once they have stayed in their chosen field of endeavor long enough that they eventually find themselves making music alongside those who were children when they began. Those who try to adapt and keep their sound contemporary are often accused of trend-following or bandwagon-jumping. Those who maintain the course and adhere faithfully to the sound that first brought them to prominence, on the other hand, are frequently labeled as anachronistic acts hopelessly out of touch with the here and now.

To her credit, CeCe Winans, whose debut album with her brother, BeBe, hit the shelves just around the time Ronald Reagan was beginning his second term in the Oval Office, has circumvented this proverbial fork in the road brilliantly with her most recent project, Let Them Fall in Love. Reaching back to the early '50s and traversing all points between that time and roughly the mid-'80s, her latest outing covers a slice of time that begins and ends prior to the release of her first record, and, as such, manages to succumb to neither of the drawbacks mentioned above.

The opening cut, "He's Never Failed Me Yet," is a grand, '60s-sounding ballad complete with lilting vocals, sweeping orchestral flourishes and a glorious wall of sound aesthetic upon which legendary producer Phil Spector, himself, would certainly have placed his stamp of approval. "Run to Him," by comparison, is a refined, impeccably-produced slice of Brill Building pop, a la the Shirelles "Will You Still Love Me Tomorrow," that should be required listening for anyone born during the last five decades. And "Peace from God" stands as a consummate first cousin to just about every song Burt Bacharach and Hal David ever wrote for the great Miss Dione Warwick.

Elsewhere, the country-tinged "Why Me" perfectly captures the reverence and longing of the chart-topping 1973 Kris Kristofferson original. "Lowly" is a delightfully catchy, and refreshingly wide-eyed, slice of early '70s gospel-rock, a la "Put Your Hand in the Hand" from Canadian one-hit wonders, Ocean. The splendidly sublime title track sounds as if it could have come from a lost Rogers and Hammerstein Broadway musical. "Never Have to Be Alone" is sewn from the same beautiful thread as sweeping '80s love ballads like the James Ingram/Linda Ronstadt duet, "Somewhere Out There," and Peabo Bryson's "If Ever You're in My Arms Again." And the infectious black gospel rave up, "Hey Devil!," finds Winans and members of the illustrious 1960s gospel outfit, the Clark Sisters, summoning the sort of teeth-baring, no-holds-barred enthusiasm that, in an ideal world, would surely send Satan and his legions scurrying to find the nearest exit.

The more cynical members of the listening audience will likely label the genre- and decade-jumping as a mere gimmick to spark sales. Naysayers, on the other hand, will want to dismiss the album's throwback nature as mere novelty. But given the way in which Winans veritably owns each of the songs in this diverse offering, all such arguments are veritably annihilated in the wake of her remarkable talent, which, it should be noted, is easily every bit as keen and commanding now as it was when she and her brother first rose to prominence nearly 35 years ago. Few artists manage to create a work this strong at any point in their career, much less during the fourth decade of practicing their craft -- an observation that only serves to render Let Them Fall in Love that much more of an out-and-out triumph.