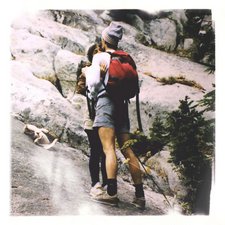 Tooth and Nail Records has a long history of signing various artists from different genres. Tyson Motsenbocker, however, may be the biggest step away from the indie and hard rock sounds they are most known for today. In his full-length debut, Letters to Lost Loves, Tyson brings an indie pop/rock sound blended with folk and Americana sensibilities. The record is inspired by the journey Motsenbocker took in 2013 after his mother's death. By journey, I mean a 600-mile walk from San Diego to San Francisco. During this long stroll down the California coastline, Tyson says that he gained a new outlook on life, renewed his relationship with God, and found peace. The album is deeply personal and even features of picture of his mother and father on the cover.

The album starts with the very mellow and folksy number that showcases Motsenbocker's vocals -- very comparable to Judah Akers of Judah and the Lion. The lyrics come from a darker place when his mother was sick, but still alive. The song is full of doubt and cynicism about God. Tyson sings, "But when I prayed for healing, my father's words rang through the door. Son, I don't think Jesus is in business of healing anymore." The words go on to say that God may be too busy with things like "His organized militia to fight the war on Christmas," or "protecting our children from the gays." If you're not familiar with Tyson's story, or the theme of the album, the song could most certainly strike you the wrong way. In the end, the song is an honest look at his outlook at that point in his life. "Honest" is where that perspective and outlook starts to change. Tyson talks about his walk and when he reaches San Francisco Bay sings, "I was only standing closer to the man I tried to lose along the way." "I Still Have to Go" continues his story after reaching San Francisco and talks about still searching for answers in his life. This one is one of album's best tracks. "Lost" is another touching and honest song as Tyson sings, "I am lost without you" to his mother. The album eventually comes to a close with "The Passage," in which a ride on a ferry is used as a metaphor for life and his journey.

Tyson Motsenbocker's story of doubt, hurt, and loss is one many can likely relate to in their own lives. Tyson is open and honest about his journey and spiritual struggles, and that uncertainty is played out clearly in the lyrics. If you're looking for a worship record that is full of praises, Letters to Lost Loves will not be your cup of tea. If you're looking for something a little more mellow to listen to and reflect on, Tyson Motsenbocker's full-length debut may be exactly what you're looking for. Though I wish there was a little more of the story of his relationship with God and the peace he discovered, Tyson still provides a solid musical product here. Tyson Motsenbocker walked 600 miles in order to make this record happen; give him at least forty-two minutes for a listen of his work. You may very likely find it to be worthwhile.

Indie/Folk solo act Tyson Motsenbocker is new to the scene with his debut full-length offering Letters to Lost Loves, which resounds with potential but ultimately doesn't do much to differentiate itself from any other indie act. The album starts off relatively strong with the first three tracks, however. "In Your Name," while it starts the album off in standard folk pop fashion, offers insightful lyrics about wondering if God is listening or too busy. And the lyrics alone carry that song through its 5-minute runtime. Next up is "Can't Come Home," a bright, upbeat romp that carries a catchy chorus with an infectious melody. Easily the best track, "Evangeline" is the most unique and diverse track on the album. It's filled with a driving beat, smooth guitar tones, and soothing vocals with subtle harmonies. Sadly, the rest of the album runs together in a slightly boring fashion. Recycled percussion, repetitive acoustic guitar strums, a monotone vocal range and dull lyrics carry it through to an ultimately unsatisfying conclusion. In the end, there is enough good in the album to recognize the talent that Tyson Motsenbocker obviously has. And I sincerely hope he is able to make his next album shine brighter than this disappointing release. - Review date: 2/3/16, Dylan O' Connor

Tyson Motsenbocker is a singer/songwriter who is bringing something refreshing to the genre with his Tooth & Nail debut Letters To Lost Loves. Album opener "In Your Name," which might end up being one of the best songs to come out this year, sets a high bar with a quietly tense soundscape and evocative musings about how people ignorantly and selfishly profaning the name of Jesus can leave a bitter taste to others. "Can't Come Home" and "Evangeline" keep the quality tunes coming, but by the fourth track the momentum is lost--only to fully resurface with a re-recording of his song "I Still Have To Go". This is largely due to the less memorable and slow musical backdrops of the rest of the tracks and how the cryptic lyrics make it hard to recognize each song's weightiness for those unfamiliar with his story. Overall though, Letters To Lost Loves is a promising start for a talented artist. - 2/28/16, Christopher Smith of Jesusfreakhideout.com