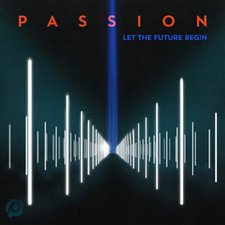 To thousands of people around the nation, one of the most anticipated events of the New Year is the Passion Conference; several weeks later, their anticipation turns toward the day that the live album made from recordings of the times of worship at the conference is released. It is because of these conferences that three of the biggest names in Christian Music (Chris Tomlin, David Crowder, and Matt Redman) first captured national attention. This year's edition of Passion is Let The Future Begin, and it features 14 songs (plus one more on the "Deluxe Edition") of worship presented by the artists of Louie Giglio's sixstepsrecords.

First of all, the thing most are probably wondering about at the onset is the song breakdown, so to save you from taking a trip to the bottom of the screen and having to do the math yourself, I'll tell you: Chris Tomlin has five songs, Kristian Stanfill has four, and everyone one else has a grand total of one each. Yup, Matt Redman, David Crowder, Christy Nockels, Kari Jobe, Charlie Hall, and Brett Younker, combined, have two-thirds the number of songs of two other people. And there are no duets (except for Matt Redman in one verse of Tomlin's "Shout"). Of course, those that have followed Passion from the beginning have doubtlessly noticed that some artists (read, "Chris Tomlin") have definitely been steadily taking over the track listing, peaking two years ago as Tomlin sung six of the twelve tracks on Here For You (not to mention eight of fifteen on the Deluxe Edition). While the presence of Stanfill on four songs does keep this from completely becoming a "Chris Tomlin and Friends" worship session, it's difficult to get over the fact that it feels like the other artists are merely playing supporting roles to the "star," Chris Tomlin.

Nevertheless, how is the music? Well, the opening track (and the source of the album's title) is the Martin Smith-penned "God's Great Dance Floor," which was featured by Tomlin on his new album, Burning Lights. As far as openers to live worship albums go, it is difficult to beat "God's Great Dance Floor." The track itself is excellent, and it is perfectly selected as the opener, but Tomlin's interaction with the crowd here almost kills it. In a live setting, interaction between the singer and the crowd works because everyone is standing and cheering and feeding off each other's energy. But on a recording, when one isn't surrounded by this organized chaos, all it does is grind the song to a halt, especially a song with this much energy.

Then, much like last year, the level of energy that was in the opening track is not approached again throughout the rest of the album. The next four offerings are all about average (except for Kristian Stanfill's "The Lord our God," which is a poster child for painfully generic worship music), leading into the next highlight. Passion special guest Kari Jobe comes in to sing the song that she will be eternally linked to (for better or for worse), "Revelation Song." I have really mixed feelings about this one. On the one hand, I am a big fan of "Revelation Song," and Jobe does a fantastic job; on the other hand, in the past, Passion has always brought us some fantastic original worship songs mixed with songs on artists' most recent albums. But Jobe is a special guest singing a song that she first released four years and two albums ago. Is this really necessary? It almost feels like they are trying to capitalize on the near-celebrity status that Jobe's version of "Revelation Song" has achieved. But I digress, the song is still a highlight.

Both of the next two offerings, Stanfill's original "Children of Light" (a fairly catchy song and a minor highlight), and Tomlin's "Whom Shall I Fear (God of Angel Armies)" from his latest solo album, are solid inclusions, followed by singing the lyrically and musically simple "We Glorify Your Name," which is mostly sung by the audience. And then comes David Crowder's sole appearance on the album. In previous years, Crowder has usually been one of the only sources, if not the only source of uniqueness and musical originality. But here, Crowder is very subdued, singing another lyrically and musically simple song for an intimate time of worship. As noble as this is, it basically dooms the album to remain in musical mediocrity if not even David Crowder can offer something that breaks the mold. And, indeed, the rest of the album follows suit by switching between more intimate songs and anthems. Christy Nockel's strong vocals aside (which almost single-handedly turn "My Delight Is In You" into a highlight), there really isn't anything else worth highlighting on Let The Future Begin.

The "Deluxe Edition" (which adds one song and five videos, including Giglio's full Passion 2013 talk) is where we find Charlie Hall's lone inclusion, "The Death of Death," which is definitely one of the better tracks featured in this project. Honestly, for someone that has been with Passion since the very beginning, even though Hall has never really achieved the level of recognition as his Passion counterparts, I find it quite disappointing that they couldn't manage to find a spot for Hall on the main album. I would much rather have "The Death of Death" featured on the main album than, say, Kristian Stanfill's "The Lord Our God" (as well as some other entries). But even if it wasn't, I feel they should have done it anyway because of his history with Passion (or even if only to keep Tomlin and Stanfill from dominating the tracklist so much).

I can't help but think that this is definitely one of the weaker albums Passion has put out. Yes, the worship aspect of the album is great, but that is to be expected. There were really only three songs ("God's Great Dance Floor," "Revelation Song," and "My Delight Is In You") that were impressive, and when one of those songs is four years old and sung by a guest vocalist, that doesn't speak too highly of the album overall. Fans of Passion will definitely want to get this album, but I honestly doubt it will last very long before it starts collecting dust, and by that time, the anticipation toward the next Passion release will have started.