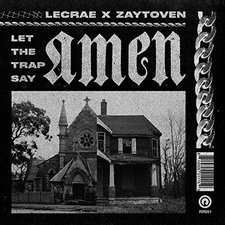 
Trap music is everywhere. Even if you're unfamiliar with the term, you've no doubt at least heard the music itself. All it takes is spending some time watching funny videos on Facebook or Vine (RIP), and you'll surely come across it. It's an easy genre in which to write songs, so it's being done to death. It's also one of the lowest forms of rap music, which makes it all the more puzzling that Lecrae of all people would release a full album's worth of trap music. But teaming up with producer Zaytoven, that's exactly what he did on his latest release, Let the Trap Say Amen.

Looking back through his discography, Lecrae has certainly had songs that had trap influence, which makes sense, considering that Lecrae has said that he has always had a soft spot for it. But those songs have always been done in a more artistic way without going full trap. Let the Trap Say Amen is just thirteen tracks that mostly sound the same and that use all the tropes of every other trap song. The same flows, the same robotic, auto-tuned vocals, the producer putting his watermark on every track (literally every track, in case we forgot who produced it or whose name is on the album cover). There are also plenty of miscellaneous vocal sounds, like "yeesh," "woo," and "skrrt," accompanied by a host of artists well-known in the genre, including the nearly unintelligible Waka Flocka Flame. Even a lot of the lyrics are similar, though the drugs, sex, and money lyrics are flipped around and presented as a waste of time, because after all, it is Lecrae, and the Gospel is still his first priority.

Now, in all fairness, there are some positive things to say about this album. For starters, the entire reason this album exists is because Lecrae's intent was to explicitly make a trap album. And with the influence that he has in the mainstream at the moment, making an album of this nature, in a genre that is, quite honestly, a language of the current culture, is a really good method of reaching out to people who need to know that Jesus is real and that He can save anyone willing to accept salvation. So Lecrae accomplishes what he set out to do here, and for that, he deserves some credit. On top of that, despite the fact that trap is not very demanding as far as rapping ability is concerned, Lecrae does find opportunities to flow a little. It isn't often, but his verses in "Get Back Right" are better than I expected. And of course, he presents the Gospel in a way that's accessible but still tells the truth about the destructiveness of a sinful lifestyle.

Last year, we saw Lecrae finally take his first official step into the mainstream with his first album on Columbia Records. Let the Trap Say Amen may not be a strong album in an artistic sense, but it's a strategic next step for him. Your take on this album will obviously depend very heavily on your tolerance level for trap music; if you detest the genre, you won't make it far into this before giving up. Otherwise, you might find yourself getting some enjoyment out of it.

Reach Records mogul Lecrae Moore is essentially the face of CHH and Let the Trap Say Amen is his twelfth release. This project has a very specific purpose as Lecrae teams up with one of the pioneers of trap sound, Atlanta native and Grammy winning producer Zaytoven. The two collab to create a mixtape that speaks of specific stories and showcases a side of trap music that is generally not heard. Lecrae recently said that Jesus was willing to be associated with darkness to bring light and this is his intention on this album. To be clear, there are some hits and misses on LTSA and fans should be aware that this is not your typical Reach Records album. However, for his last two releases, Lecrae is showing creativity and purposefully not releasing a typical Reach album.

This project starts with Get Back Right, delivering one of the best moments on LTSA, as Crae spits his typical hot flow while Zaytoven lays beats that are straight-up fire. The song is about focusing on eternal things instead of earthly things as the rapper flows, You and your squad versus me and my God. Look, bro, you ain't finna win that now. 2 Sides of the Game features another Atlanta native, Waka Flocka Flame, as the two rappers share their separate sides of growing up in the ATL, giving insight that many dont consider. Other standout tracks would be Plugged In, Yet, and By Chance, with all three speaking about trusting in God and fighting to become successful all while delivering amazing production. As said, there are some misses here as well. Preach and Holy Water contain rather overly simple and repetitive hooks, while Blue Strips speaks on the power of money, but doesnt offer much of a solution other than one line where the hip hopper spits she know she meant for greater, leaving listeners wanting more resolution.

I was personally hoping for a little more rhyming focusing on Jesus, but I understand that Lecrae specifically intended to bring understanding and build community, especially in underserved neighborhoods across America. To be clear, he references hope in God multiple times and delivers positivity throughout the thirteen track project. In the end, Let the Trap Say Amen was a very purposed release and Lecrae has indeed served up what he intended to. In that process, he may not captivate all of your standard CHH fans, but he is certainly going to gain some new listeners. While this is not my favorite Lecrae release, I certainly applaud his creativity and his effort to reach more people. - 6/24/18, Kevin Hoskins of Jesusfreakhideout.com