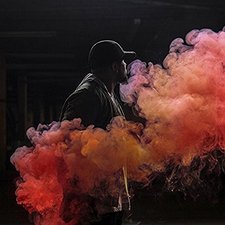 
Canon is one of the most talented rappers in CHH today. His verses are often filled with passion and aggression and at a pace that is matched by few. As current fans know, he suffered a life-threatening accident recently, and many were wondering if the rapper would make more music. About a year ago, he dropped the single "Grateful" just to remind fans that he is doing well and that he will be making rap tunes in the near future. After much anticipation, Loose Canon Volume 3 is finally here; let's see what Canon has to offer this time around.

LCV3 opens with the appropriately titled "I'm Back" where Canon does his typical thing and it is a good reminder that he is indeed back at it and ready to go. Up next is "Eagles," definitely a standout track on LCV3 where he spits aggressively with speed and fluidity about having a new perspective in life. "Over Do It" features label mate Derek Minor and it is in the running for my favorite rap song of the year. It's simply banging! The production is hot and the track bumps heavy with Canon spitting "If God gave me the gift to shine brighter then sorry to you haters in the game cuz I'm styling on you." "My Little Baby" serves as an emotional masterpiece where the artist speaks to his wife and how she stood by his side during the most difficult of times, and it is a stellar track. Other standouts would be the unique "Hold Up" and "The Family." The former begins with a spoken word flow before switching gears to flow a track about various issues in life, often displayed on social media, and how we need to focus on the Lord through them. The latter is a tribute track to his fans who have been there supporting him since day one. Fittingly Canon spits hard with lyrics such as "Breaking it down for supporters I remember reporting Spotify went up every quarter because, I'd been releasing and feeding them" speaking directly to his fan support, and it is a solid choice for the finale track on Loose Canon Volume 3.

There really isn't anything bad on LCV3 and this is by far my favorite full length release of Canon, but I do wish I had a little more than ten tracks, which is fairly short for a rap album. That being said, Canon produced much of the album himself (which was often straight fire) and I can see myself playing this for a long time to come. If you dig Canon, you will definitely love this and even though 2016 has been solid as far as rap releases goes, don't let this album slip by without checking it out.