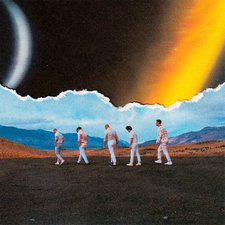 
After almost every band on the label released something in 2019, it was time for Tooth & Nail Records to sign some fresh blood. Earlier this year, they signed a band called KIDS, a group of five guys from Ft. Lauderdale, Florida. The band released an impressive and fun record called Rich Coast in 2015 and are looking to make lightning strike twice with Lost Cities.

The album begins with "Arrival," which pulls you in with a spacey build-up of sound and the lyrics, "What if we all woke up on a spaceship? A lifeboat, destination: Andromeda." It's reminiscent of the opening tracks of the first two brave Saint Saturn albums. "Arrival" leads you into an album filled with dreamy alternative/pop music that plays off of that spacey, otherworldly sound, but that's made up of a variety of different subgenres. It's quite an accomplishment that almost every track sounds like it could be from a different album than the previous one, while simultaneously coming together to create a cohesive body of work. "Stay" is a super catchy pop jam, "Dry Bones" is a slower-paced, synth-driven track with an anthemic chorus filled with trumpets and soaring vocals, and tracks like "Not Enough" and "SOS" veer more toward electro pop territory. Not everything they offer works as well; "The Mourn" combines looming synth, heavy drums, and some mild folk elements, which sounds really interesting, but ends up being a weak link in an otherwise enjoyable chain. But that one track aside, the band nearly effortlessly displays their versatility and ability to handle multiple styles of music with ease.

With Lost Cities, KIDS has created an album that is accessible without sacrificing creativity. It's an album that can probably be enjoyed by almost any open-minded music fan, but especially fans of artists like Civil Twilight, M83, and maybe even Citizens.