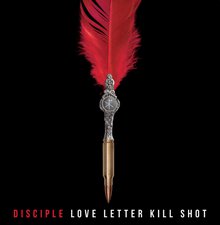 
It is seemingly improbable that Disciple is still around and relevant in 2019 -- with 12 studio albums under their belt, they have a longevity that is rare in Christian rock music. Disciple released their first album, What Was I Thinking, in 1995 and has undergone several lineup changes over the years, most notably with the 2014 release of Attack, which boasted all new members except lead singer and founder, Kevin Young. Their 2016 release, Long Live The Rebels, improved on the new direction the band went with Attack, and this latest release, Love Letter Kill Shot, continues to build on the great chemistry of rhythm guitarist Josiah Prince, lead guitarist Andew Stanton, drummer Joey West, and Kevin Young.

Disciple has always had musical cohesion within a single album. Love Letter Kill Shot has that musical cohesion, and might be their most thematically cohesive album to date. You may have heard the expression that the Bible is a love letter to you from God (which, at best, is an incomplete description). Disciple puts a spin on that phrase, adding that it is a kill shot to die to self and live for Christ. This theme is most directly conveyed in the track Fire Away. Based on the verses in Lamentations 3:12-13 and co-written by Loyals singer Dane Allen, Fire Away proclaims Your love letters a kill shot / Tearing through my soul til nothings left. Asking God to fire away at his heart is an interesting contrast to their 2010 song Dear X which tells shame and hate to Go ahead, put a target on my forehead / you can fire but youve got no bullets. Cuff The Criminal ties into this theme with the criminal being the dark in my soul. After covering cycles of anxiety, depression, and sin with tracks like Cuff The Criminal, Panic Room, and Misery, the track sequencing starting with Chemical Wisdom is incredibly well done. Chemical Wisdom declares that we wont settle for the bandage solutions the world has to offer for our problems, Never Too Late says its not too late to turn your problems and your life over to God, Touch of Pain expresses the freedom we have when we let go of our pain and hold on to grace, Walk With Me is like a friend coming along to support you to Christ, making closing track Best Thing Ever a sweet coming to Jesus moment, wrapping up the theme of the album, Light has come into my world and buried my dark and You are the best thing that has ever happened to me / And I am Yours, forever Yours.

The lyrics (written by all band members to one degree or another) are delivered by Kevin Young with a passion and urgency that has permeated their career. The versatility of Kevins vocals are on full display from his soaring clean vocals to his angsty screaming, and some of his signature quasi-rap/singing (just listen to the fantastic verses of Never Too Late). For the vast majority of Disciples existence, Kevin has been the only one that has laid down vocals on studio albums, but with Attack we heard ex-bass player Jason Wilkes sing a bit. Lead single Cuff the Criminal immediately opens the album with mid-tone synths and vocals from Josiah Prince. He sang occasionally on Long Live The Rebels (the pre-chorus of Erase and parts of Come My Way), but putting him front and center continues the evolution of Disciples sound that we hear from album to album. The band also brings in their second-ever guest feature for this album with Andrew Schwab of Project 86 commanding his way through a chorus for Panic Room. A heavy-hitting and slightly creepy song, Panic Room meets the high expectations of bringing together two Christian hard rock staples. From small details like the tone of Joey Wests kick and floor tom transitioning into the first chorus, to the overall pacing and songwriting, everything is meticulously crafted and then powerfully delivered.

In fact, the production throughout the record is top-notch, thanks to longtime Disciple producer Travis Wyrick. The bass is a bit quiet and only has a couple moments to shine (first verse of Panic Room and part of Play To Win), but there is plenty of low end coming out of the guitars and drums to give the mix a nice full sound. The album is well-balanced with three radio rockers (Fire Away, Walk With Me, and Best Thing Ever), eight heavy tracks, and one power ballad (Touch of Pain). There isnt anything quite as heavy as metalcore-flavored songs like Fight For Love from Scars Remain or their album Back Again (although Reanimate comes close), but there arent really any slow or quiet songs either. Overall, Love Letter Kill Shot is another fantastic installment for their impressive catalog.

Disciple has been a staple name in the Christian rock/metal scene for over two decades, and for good reason. With each album, the band has successively put a creative twist on their classic sound; changing things up just enough to create a new listening experience, while maintaining their own definitive style. Their latest record, Love Letter Kill Shot, is no exception as it delivers hit after hit, with a solid balance between the heavier and more melodic moments. The experimental Cuff The Criminal, and Panic Room (featuring Project 86's Andrew Schwab), showcase the bands ability to seamlessly incorporate new elements into each project. Older and newer fans of Disciple will find a lot to love about this release, and those looking for a solid rock record to spin should be quite satisfied with their latest endeavour. - 9/12/19 James Larsen

After hearing that Disciple signed with Tooth and Nail, fans were curious if any major changes were on the horizon. Early singles Cuff the Criminal and Panic Room seemed to indicate an entirely new direction for the band, bringing in pop/electronic elements. Thankfully, any concerns that this is not the same Disciple can be laid to rest--Disciple is back, and their sound is fresh without compromising their authenticity. Highlights on Love Letter Kill Shot include the aforementioned Panic Room, the sports arena anthem Play to Win, and the frenetic rocker Chemical Wisdom. This album should satisfy old fans while winning some new ones. - 9/12/19 Nicole Vacca

Being quite honest, I havent been much of a Disciple fan in quite some time. No disrespect at all, they just havent really appealed to me. That being said, Love Letter Kill Shot was a pleasant surprise. A lot of what the band does best is present here, and for the most part, its an enjoyable listen from start to finish. Cuff the Criminal fairs better in the albums context than as a stand-alone single, Touch of Pain is an excellent and memorable ballad, and Panic Room does great blending some electronic elements with shredding hard rock, only made better by Andrew Schwab. There are weaker moments, like the quasi-rapping in Play To Win, and the occasional cringey lyrics (I wanna DJ my own funeral to watch the tables turn), but I found much more to like than dislike. - 9/13/19 Scott Fryberger