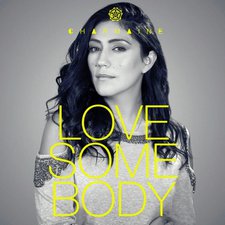 Singer/songwriter Charmaine's career has had somewhat of a resurgence in the last few years. While 2010's surprise masterpiece Love Reality never took the charts by storm, it reintroduced Charmaine's name into the CCM pop scene with a certain class. At the same time, aside from a guest spot on Jonathan Thulin's eventual #1 hit "Dead Come to Life," not too much else happened between then and now, but the independently-produced Love Somebody EP releases with hopes to change that.

For the unaware, Love Reality came out of nowhere, and what made it so special was Charmaine's fresh approach. It was a symphonic pop sound that didn't really compare to anyone else's methods, taking its own time to develop itself over the course of the album and making an artistic statement in the process. While Love Somebody EP stays true to Charmaine's trademark sound, there seems to be an invisible source trying to hurry things along faster than they should. Especially with "Love Somebody" and "Play the Song," the EP feels rushed along, and these tracks don't seem to value themselves enough to let their atmospheres fully develop. It's not to say that the tracks here aren't still well delivered as they are, but they count for less on a shorter, bite-sized project compared to Love Reality's epic quality. Seemingly, this project is over barely after it starts.

The opening title track definitely feels the most like a single from the standpoint of song structure, playing it just a little too safe with a dry chorus ("Then You change it all when you love somebody, love somebody, love somebody, love"). It doesn't set the EP quite on the right course, but looking at the four songs as a whole, Love Somebody EP is still a noteworthy pop project because of its uniqueness. There simply just isn't anyone making the same kind of pop music like Charmaine, and sometimes that's enough to legitimately stand out. The synths and vocal effects are distinct (with even a well-timed saxaphone on "Empire") and do feel like a direct result of Charmaine's creative trajectory, albeit with a sometimes chaotic effect. Charmaine never relies on technology too much, however, letting her powerful and soaring vocals take the reins on "All the Lights" and "Play the Song." "Empire" ends up being a fiery finish to the short project, allowing the song's sheer force to take the listener captive until the final few notes.

To call Love Somebody EP a disappointing record would be pretty unfair; the project's solely a Charmaine creation without extraneous bells and whistles, and it gives a lot more effort than most pop projects. While Love Reality set the bar quite high for Charmaine's work, and although a four-song EP after a quiet four years feels a bit underwhelming, the time is right to see an artist like Charmaine see another breakthrough. Love Somebody EP is a more than worthwhile release, and here's hoping that there's only more to come from this best kept secret of Christian music.

Charmaine sure knows how to make people wait. After eight years of silence after 2002's All About Jesus, she unleased this website's 2010 staff pick of the year, Love Reality, totally reinventing her sound. Now four years later (though, to her credit, she released the title track of this EP last November), she finally has offered that album's long-awaited follow-up, the Love Somebody EP (though I would be surprised if there is not soon an announcement of a full-length release in the near future). If there is one thing the brief four-track EP does best, it shows that Charmaine has yet again reinvented her sound. This time, she gives up a rich and colorful Euro-pop sound textured with synthesizers and lots of electronica flavor. The first thing I thought of as the opening chords of "Love Somebody" hit my ears was Owl City, but as the EP progressed, it proved to be a more eclectic and intelligent mix of sounds than what Adam Young has offered recently (especially on The Midsummer Station). It is possibly the poppiest thing that has been released in the Christian Market in a while (and certainly this year). Lyrically, as on Love Reality, Charmaine focuses on love, both God's love, and love towards each other. In spite of its poppy sheen, "All The Lights" has definite contemporary appeal and will likely make its way onto the rotation of most Christian radio stations upon its release as a single. The EP's brevity makes this EP very much a teaser for whatever is next for Charmaine, clocking in at a mere fourteen and a half minutes, but it is without doubt a delicious tease. - Review date: 6/15/14, Mark Rice