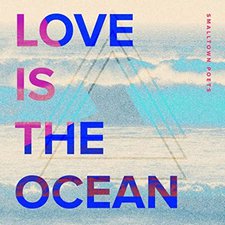 
Over the last few years, the way in which the average artist delivers new music to their fan base has changed somewhat. While the full-length album, as we know it, hasn't gone entirely extinct, or even threatened to reach endangered species status, just yet, the number of individuals and groups opting to distribute songs one at a time is unquestionably on the rise. This new paradigm is hardly lost on the members of the venerable Georgia-bred alt-pop collective, Smalltown Poets, who have released six of their last seven offerings, including the latest, in the single-track format.

Musically, "Love Is The Ocean" harks back to much of what first endeared the Poets to so many: driving rhythms, shimmering guitar work, an infectiously indelible melody and, atop it all, front man Michael Johnston's distinctively plaintive vocals which tie each of its already winning elements together into a whole that is greater than the sum of its parts. Hardly a mere exercise in nostalgia, though, the new cut features an ethereal sonic touch, a minor- to major-key alternation and decidedly modern production aesthetic that render the composition thoroughly unique and station it squarely in the present day.

Its skill at crafting irresistibly catchy pop/rock tunes notwithstanding, one could argue that the band's greatest strength remains its insightful, thought-provoking lyrics. Thankfully, that undeniable way with words hasn't dimmed with the passing of time. On the contrary, from brilliantly-phrased seeming contradictions ("What if love isn't a secret/ And we're all meant to keep it"), to subtle double meanings ("Every wave on the ocean/ Is a salty solution"), to the consummate use of nautical imagery to detail the inherent yearning within the human soul ("In my heart is a harboring anthem/ Of mutiny longing for ransom"), the new single is graced with a poignancy and depth that few of the group's contemporaries, past or present, have been able to match.

The quintet's first two albums, bona fide classics though they were, ended up functioning as a mixed blessing of sorts for its creators. On the one hand, they fired a clear and unmistakable shot across the bow of the Contemporary Christian Music landscape, announcing the arrival of one of inspirational pop's most talented and engaging outfits. On the other hand, though, they set twin high-water marks that any band, even the STP collective, themselves, would find a daunting task to replicate. Indeed, most diehard fans, if they're being completely honest, have long wondered if the group would be able to fashion a work to equal the inaugural pair of projects. Here, two-plus decades on, and against all conceivable odds, the supremely-talented five-piece from Tifton has managed to do just that.