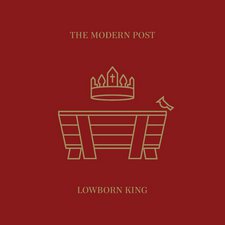 Since putting Thrice on hold, lead vocalist and worship leader Dustin Kensrue has kept rather busy with solo music. Of course, he released a long-awaited second album under his own name last year on BEC Recordings (and recently announced a follow-up album for a Vagrant Records release next year), but he's also done some work as the lead vocalist of a band called The Modern Post. One short EP in 2012 is all we had to go on from this band, but then we got a lovely little surprise in the form of a Modern Post Christmas EP, and it's everything you'd expect from the band.

The first of two "traditional" Christmas carols jumpstarts the EP, as The Modern Post brings us their rendition of "Angels We Have Heard On High." A generally upbeat carol, it's a great selection to get things rolling; it's done in true Modern Post fashion, and there is a lovely brass section in the chorus. An original song follows, called "Child of Glory." It brings the pace down a little bit from the previous track, and serves as a more intimate and reverent worship song (the bridge is simple and beautiful, as Kensrue sings "Lord I love You, Lord I need You, I will live for You alone," then brings the chorus back in, singing "Child of glory, infant holy, humbly I approach Your throne, peaceful babe and awesome Savior, I will live for You alone"). It's a wonderful new addition to a Christmas or worship music playlist. As is the following track, a cover of a hymn called "Let All Mortal Flesh Keep Silence," which gets inspiration from the Book of Habakkuk. Again, it's slower and reverent, and the music switches out some of the organic instruments for some synth and other electronic composition, akin to one of the slower tracks from Citizens & Saints' newest release, Join the Triumph.

As I mentioned above, there are two more "traditional" Christmas songs on this EP, and the second of the two comes in as the fourth track. With all of the Christmas releases over the years from the Christian market, "What Child Is This" seems to be a rather unappreciated carol (compared to songs like, say, "Oh Holy Night" or "O Come O Come Emmanuel"). Poor Old Lu did a wonderful version more than a decade ago, and now The Modern Post have provided possibly the best version of this song I've heard since then. This rendition features some light strings, but also a bit of an indie rock sound more like what we may have expected from Thrice rather than The Modern Post. The least Christmasy song on Lowborn King is the closing track, and it's a Kensrue original - in fact, it's from his 2008 Christmas album, The Good Night Is Still Everywhere (which he just recently had pressed to vinyl - with bonus material - via Staple Records). "This Is War" has some industrial sound, with some heavy amounts of synth for added effect. It's an unexpected sounding song, but it's a terrific song that proclaims Jesus' birth as war on sin and death.

The Modern Post's Lowborn King EP is a real treat. Not only was it completely out of left field, it's also one of the best Christmas releases of 2014 (despite its short length). Whether you've followed Kensrue since he fronted Thrice or you've just recently been exposed to him as an official player in the Christian market, you can't go wrong with this new EP.