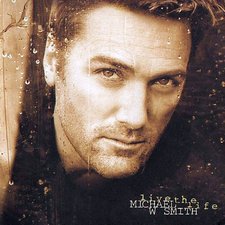 
After the release of his third consecutive platinum-certified record, I'll Lead You Home, Michael W. Smith proceeded to write 26 new songs for his next record, of which he would select a dozen or so. But no matter what combination of songs he tried, he could not create a tracklist that he was completely satisfied with. Thus, as he tried to figure out the best possible record, the release date was pushed back at least twice, building up the anticipation for this record like no other record he had ever put out. And so, nearly a year and a half after he first planned on releasing this album, it finally came out, and the result is an achievement that, in a career of absolutely remarkable achievements, exceeds anything Smith had done before or since.

The album begins with a ghostly buildup into the first song, the aptly-titled "Missing Person." An all-time favorite from MWS, and one of this reviewer's personal favorites, perhaps no song ever written better captures the longing for the lost fervor for Christ that young Christians so often have. Following is the classic "Love Me Good." From circuses to merry-go-rounds, from the Brady Bunch to fearing shadows, from Mongolian barbeque to Genghis Khan, this is probably the most unique, catchiest, most beloved song on this side of "Friends" in the whole MSW collection. And then finishing the album-starting trifecta is the hauntingly inspiring title track with the anthemic chorus "For the world to know the truth/There can be no greater proof/Than to live the life/Live the life/There is not love that's quite as pure/There's no pain you can't endure/If you live the life/Live the life."

After such a strong start, one could argue that the climax of the album has already come and gone. While there are nine more songs on the record, none of them quite reach the power and theatrics of the first three. But, realistically speaking, the rest of the album is still quintessential Smitty, particularly the final three tracks. "Never Been Unloved" is much gentler than the first three tracks, providing a nice little break to sit back and enjoy. "I Believe In You Now," a catchy tune about finally discovering the truth of the Gospel, is another of my favorites among his lesser-known tracks. "Don't Give Up" is another catchy song which almost serves as a continuation of the previous song, being very similar both musically and in message. "Let Me Show You The Way" is the first truly slow track on the record, and sequentially works well after two quick-paced catchy songs. Two more slow tracks follow, "I know Your Name" and "Matter of Time," the latter being a sweet song about the first time Smith saw (not met, but saw) his wife Deborah, to whom he was engaged to three weeks later. And then wrapping up the album is love song "In My Arms Again" (which was written for the movie soundtrack for Titanic, but didn't make the final cut, which went with Celine Dion's "My Heart Will Go On"), a solemn-yet-optimistic bagpipe instrumental in honor of the incomparable Rich Mullins (who died a year earlier in a car accident), and a song of hope and mourning written for some friends of his whose baby died two-and-a-half days after it was born.

Saying this is Smitty's finest album in a career full of fine albums is about as subjective as it can get, but I tend to lean towards that opinion. Few artists have the talent, budget, and ambition to create an album of this caliber, and Live The Life is about as good as a CCM album can get. The production gloss can tend to be overpowering at times, and perhaps Smitty indulges a bit much in the bombasticity department (an overarching theme in nearly all his music), but it would take some serious musical snobbery to look past this album. Plus, the sound of it has aged very well, and while not quite as timeless as his orchestral-led I'll Lead You Home, you don't get too much of a vibe that the music is a product of 1998. But I can't think of any reason why one can't reach into their own WABAC Machine to pull this one out and not enjoy it.