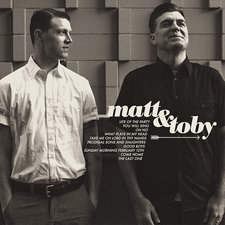 To be honest, I have a love/hate relationship with Emery. I love the band when Toby Morrell is singing the clean vocals, but I'm not fond of the screaming that inherently kicks in. So when I first heard the rumors of a possible acoustic Emery album, I was pumped. That project has now materialized for the most part with the union of Morrell and fellow Emery band mate, Matt Carter, and, while it isn't a fully acoustic effort, it's no less the album I was hoping for.

If FM Static is the softer, poppy version of Thousand Foot Krutch, Matt & Toby is the softer, poppy version of Emery. However, this duo showcases a far deeper lyrical insight than FM Static ever did. The snappy opening and danceable chorus of "Life Of The Party" only partially disguises the song's desire to be more than a partying song ("I still remember my parents divorcing/It took 10 long years of the back and forth thing/Finally I saw it in my mother's eyes/A road you can choose that you can't come back from"). Although it's not the deep appeal of the album, the catchy beat continues later in the album with "Prodigal Sons And Daughters" which adds necessary levity when stacked against the weightier tracks.

Often times, Matt & Toby focuses on God and family. The serious pop rock "What Plays In My Head" has excellent development and conveys the fears and hope of a father ("That I could be a man of faith in this quiet home that we both made/And tell our son and daughter I believe in God"). The touching biography and acoustic guitar drive the terrific finale, "The Last One." Although not the musical pinnacle of the album, "Take Me Oh Lord In Thy Hands" has a rousing finish to go along with hymn-like lyrics.

The bouncier "Come Home" and quiet strength of "You Will Sing" are both solid, diverse songs, but there are a handful of moments on Matt & Toby's debut that don't hold up to the high standard they set for much of the album. Considering the acoustic nature of the release, the synthesized vocals that pop up indiscriminately are out of place and are more of a distraction than an addition. The intense tone that starts "Good Boys" oddly evaporates when the refrain kicks in, the echoes in the vocals on "Sunday Morning, February 12th" don't increase the song's limited replay value, and the ballad "Oh No" isn't as satisfying as it could have been.

Obviously Emery's appeal is more than just their hard stuff, and fans should have no problem diving into and digesting Matt & Toby. However, the album isn't just a side project for devoted Emery fans to enjoy. Although the there are a few misses, the acoustic rock album is varied and offers a good selection of songs to go along with several highlights. As I hinted to before, this is the sort of project that I'd like to see from Emery with every release, but since this is unlikely, I hope for another Emery album soon which is quickly followed by another outpouring from Matt & Toby.

Emery fans have been teased for quite some time now with an upcoming album from their side project The Water and the Well. Comprised of the band's guitarist Matt Carter and bassist/frontman Toby Morrell, The Water and the Well recently changed their name to easier-to-remember Matt & Toby. News of the name change also came with news of their album finally coming soon through Tooth & Nail Records. To give a simple explanation of the self-titled album, all that would need to be said is that Matt & Toby sounds like a significantly toned-down Emery album. Songs like "Good Boys," "What Plays In My Head," and "Oh No" could easily be imagined with electric guitars and possibly even some screaming vocals. While describing them that way certainly isn't too far off from an accurate description, the guys definitely have their own essence that separates them from Emery. For one, Matt & Toby have some poppier elements in their music, as heard in "Prodigal Sons and Daughters." It features some light electric guitars, a little bit of synth and softly-strummed acoustic guitar in the verses, and even some electronic vocal effects and hand claps. The chorus says "We like to dance, we like to sing, whoa-oh, we know how good it's gonna be, we ain't gotta listen to what anybody says 'cause we like to dance, we like to sing" with such catchiness in tow that it's difficult not to stand up and dance and sing along. Lyrical themes feature a range about on par with the range of Emery, from problems with relationships to worshiping Jesus. Those who happened upon The Water and the Well's old MySpace page heard a few demos, two of which appear on this album. "Prodigal Sons and Daughters" was one, and "Take Me Oh Lord In Thy Hands" was the other. The worshipful tracks do go beyond these tracks, like in parts of "Come Home." There's also a country music-style story of a man and woman meeting and falling in love in "The Last One" (the music even follows suit and sounds a bit more like a country song than you'd expect from these two). If you're a fan of Emery, but not their harder aspects, Matt & Toby's self-titled debut is the album for you. It's full of Emery's passion and flavorings, but on a softer scale. Hopefully this isn't a one-time deal. - Scott Fryberger, 10/16/12