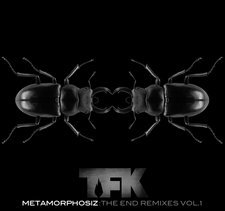 Typically, with remix records, an artist or band will ask various DJs/electronica artists to remix their songs. And also typically nowadays, the record will be nothing but totally soulless noise (Read: dubstep). However, Thousand Foot Krutch has actually done the remix reputation a solid by putting this - their first remix EP - out. Metamorphosiz Vol. 1 is actually a really fun ride through some of the Krutch's best songs as reimagined by some of today's lesser-known but still awesome remixers.

The first track on the EP, "War of Change (Andy Hunter Remix)," starts out light but turns into a stomping electronic piece without taking out the rock edge of the original song. "Light Up The Sky (Solomon Olds Remix)" was originally released for free with TFK's first two free remixes, but it still feels right at home here with its free-form dubsteppy wobbles and heavy use of vocal samples from the original song.

"Let The Sparks Fly" was originally remixed by Broken Sauce for TFK's free remix package, but it was a pretty unimaginative dubstep tune. This time it's been remixed to much better effect by Robbie Bronnimann, who provides a more danceable but also much more ominous and creepy sound to the already great song. "We Are (Karmageddon Remix)" is a constantly pounding electronic take on the opening rocker from The End Is Where We Begin that slowly builds over the course of the song.

By this point, you may be getting a little tired of the banging beats that all seem to fall into a steady rhythm, but luckily, for the final song, TFK brings back Andy Hunter to put a faster, driving take on "I Get Wicked" (For the unfamiliar, this genre is called "drum n' bass"). The mix makes thankfully heavy use of the original vocals, and is a great and edgy end to the EP.

Remix albums usually don't make the songs any better, but this one does put an interesting new spin on the original tracks. The only problem I have with this EP is that the Solomon Olds remix of "Light Up the Sky" was already available for free, so that may deter some people from picking it up. Regardless, this EP is pretty awesome for a bunch of remixes. Now I'm all psyched for Vol. 2.

Remix projects are usually very much hit and miss. In some cases, they're electronic-laden, overlong techno treatments, but for TFK's first volume of remixes, they've enlisted some of the most talented in the field--including Solomon of Family Force 5 and Andy Hunter--to create a truly enjoyable remix EP. This one is well worth checking out. - 12/7/12, John DiBiase of Jesusfreakhideout.com