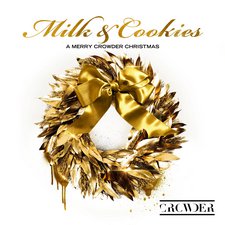 
Christmas albums are a mixed bag. It seems like most popular artists will release one at some point in their careers, with quality ranging from commercially-minded filler, all the way to entries that rival the best albums in their catalog. With Crowder's Milk & Cookies: A Merry Crowder Christmas, while not quite reaching the highs of his standard albums, longtime fans should be quite pleased with this release.

It wouldn't be an album created by David Crowder (in any iteration) without a healthy dose of experimentation, and that trend holds true here. Rather than focusing solely on carols and holiday tunes, Milk & Cookies moves chronologically from Thanksgiving ("Thanks Giver") all the way through "December 26th (Auld Lang Syne)," capturing everything from the anticipation to the aftermath of the Christmas season. Additionally, a prelude, two interludes, and a postlude all add to the conceptual nature of the album. It's a very fun approach to constructing a Christmas album, and one I can't recall encountering before.

Musically, fans of the past several Crowder albums should be quite satisfied. The strange amalgamation present of southern rock-pop-hip hop-worship that absolutely-should-not-work-but-somehow-does is fully present, unsurprisingly mirroring the formulation present on the similarly titled (and artwork-ed) Milk & Honey. Most of the tracks here take a more sentimental approach that's fitting for the season, but "The Elf Song," "The Ballad of Mrs. C (she's so sick of the beard)" and "White Christmas" all capture the upbeat stomping energy that is perhaps the most iconic element of the best Crowder tracks. Additionally, "Go Tell It On The Mountain" is a delightful bluegrass extravaganza featuring the legendary Ricky Skaggs.

For a Christmas album, a healthy number of the songs are originals. This is most noticeable lyrically, as David Crowder's lyricism shines from the confessional worship ("They say You came to fix a broken world / And that Your name is Emmanuel / I've heard about You / Born in Bethlehem, the Christ / Who left His throne to rescue / Even a doubter's heart like mine" from "I've Heard About You") all the way to the frosty labor activism of the humorous "The Elf Song." The album's 14 tracks are made up of 4 pre/inter/postludes, 6 original tracks, and 4 covers. Some listeners may wish for more of Crowder's takes on traditional tunes, while others may appreciate the originality, but the quality of both categories is easily apparent. Overall, Milk & Cookies is an excellent entry into the Christmas album space that should delight fans of Crowder, but probably doesn't offer the best artistic entry point for new listeners.