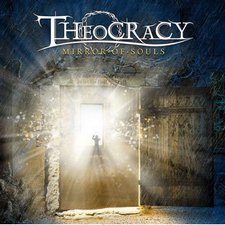 
Theocracy is unfortunately one of those "spectacular bands that no one knows about." Ever since their humble beginnings as a one-man act (lead singer Matt Smith), Theocracy has quickly garnered praise for releasing first-rate metal albums consecutively. A landmark in Theocracy's career, Mirror Of Souls starts rolling with "A Tower Of Ashes" and doesn't pull the heavy punches until "Bethlehem."

The thing that Theocracy does well--though not always--is write fast-paced power/progessive songs that stand apart from each other. This attribute is true for Mirror Of Souls: 8 of the 9 tracks are heavy and fast, and each song refrains from running into the next.

Matt Smith's vocals are both soaring and low on this record, and the riffs and solos from Jonathan Hinds and Patrick Parris are amazing as well. "Martyr" features grinding riffs and even an acoustic guitar segment and "Laying The Demon To Rest" opens with an riff that is impossible not to move along to. The masterpiece of the record is hands down the 22-minute epic, "Mirror Of Souls." With incredible lyrics and guitar parts, it takes its rightful place as one of Theocracy's greatest songs in their entire 4-album discography. The lyrics of Theocracy's songs are poetic, have depth and are either inspired by or are directly from the Bible.

Mirror Of Souls holds up well as an entire work, and each song, while some are better than others, are able to stand on their own as well. No major flaws are present on this album, unless one is upset at the small number of tracks present.