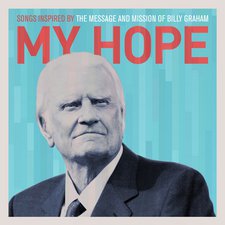 Various Artists
My Hope: Songs Inspired by the Message and Mission of Billy Graham

It goes without saying that Billy Graham has had a monumental impact of evangelism in America, and is still having an impact even in retirement. The latest movement from the Billy Graham Evangelistic Association is called "My Hope America," aimed to share the Gospel message through relationship evangelism (reaching out to friends, family, neighbors, etc, on a personal level) through the month of November. In support of their effort, several top CCM artists have made a contribution to an album of songs inspired by the ministry of Billy Graham. Obviously, many albums of this sort have been released over the years, and unfortunately the vast majority are less than compelling, usually filled with old or already-released material. Thankfully, when one of those Songs Inspired By albums comes along filled with new material, it is often worth a good look.

The Newsboys lead off My Hope: Songs Inspired by the Message and Mission of Billy Graham with the finale of their most recent release Restart, the tenth track is the title track of the 2002 album from The Tommy Coomes Band (who worked with Graham's ministry for a while), and TobyMac's "City On Our Knees" retains the audio from the original recording, but was interspliced with audio clips from Graham. Every other song was recorded specifically for this project. Perhaps the most exciting contributions to the project are the two songs from former Flyleaf vocalist Lacy Sturm. "The Reason" is a song that Sturm had sung in concert before her departure from Flyleaf, but had not recorded until now. Inspired by her testimony, the song is much more symphonic and contemporary than her Flyleaf material, but still has some rock edge to keep it from being stale. Lacy's second song "Mercy Tree" is a passion-inspired worship cover originally by Krissy Nordhoff, which is (for this reviewer) highly reminiscent of the modern hymn "In Christ Alone" in terms of structural, lyrical, and theological approach (which is far from a bad thing in my mind, but still is a mild letdown as a Lacy song).

I can't honestly say one one of the nine new songs here is a true standout, but they are all pretty solid for the most part. Matthew West (who has previously sung about Graham's impact on him in his song "Next Thing You Know") contributes here with the John 3:16-inspired "So Loved," a song reminiscent of his Into the Light material. Kari Jobe, Nicole Nordeman, and Darlene Zschech all contribute their own works as well, with Nordeman's baptism-themed "Be My Rescue" possibly being the biggest highlight thanks to her subtle electronic nods and much-beloved lyrical honesty. The familiar vocals of Michael W. Smith (aging like a fine wine) deliver another possibility for the biggest highlight with his personal ode from Graham's perspective of longing for Heaven, complete with Smitty's familiar instrumental prowess. Amy Grant covers the familiar Graham anthem "Just As I Am" (with an added chorus by Brenton Brown), and Israel Houghton also contributes with his usual soulful pop style "Broken Pieces."

While definitely one of the better multi-artist compilations in recent memory (regarding CCM, at least), there isn't anything here that will make the album stand out much. It is safe, friendly, and accessible; fans of these artists will most likely like their contributions, and other than the previously-released songs there isn't a whole lot to dislike, but therein also lies its downfall. The lack of any true standout tracks or ambitious all-round efforts (even in spite of the Billy Graham inspiration, as only Matthew West explicitly acknowledged Graham's influence) makes it feel more disjointed and unnecessary than anything else. But if you want some new songs by a variety of great and influential artists, My Hope will be a good option.