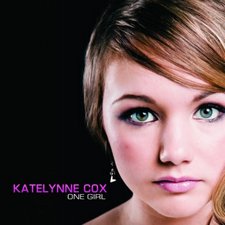 Now it would be simple to classify Cox as a tween pop artist of the caliber of The Rubyz and PureNRG, but there is an extra layer of maturity to her music than the previously mentioned bands. Not to say that the album never feels a bit young, but the dance vibe on "You And Me" is catchy while "As We Go" is a surprisingly solid ballad musically. Cox's voice has more youth than Jenny Simmons of Addison Road, but her cover of "Sticking With You" does the original justice. However, the record is not without its fair share of mishaps. Although Cox sings "I have three minutes to blow your mind/and I'm doing it" on the title track, the misplaced hip-hop influence makes the statement feel hollow. Though both "Ordinary Day" and "Prove Em Wrong" aren't bad, they aren't particularly overwhelming pop material. Though many of the tracks on One Girl are catchy, they lack innovation and resemble the approach of PureNRG.

In the midst of singing about friendship and being unique, Cox also sings about her relationship with God. She relies on pronouns in "You Satisfy" ("when I'm falling apart/You are making me whole/because only you can satisfy") and she acknowledges His presence in her life on the single "Me." One of the more thought out songs is "15 minutes" which discourages youth who will leave everything behind for a taste of fame. But the rest of the songs, whether they are about relationships or about breaking out of stereotypes, are pretty shallow. Cox shows frustration for those who try to label her relationship with her boyfriend in "As We Go," and informs her peers of her lack of confidence in parents and politicians by saying "We can't leave it up to them" on "You In Me," which acts as a nondescript revolutionary anthem.

One Girl has its moments and showcases Katelynne Cox's fine voice effectively. But some upbeat tunes aside, the music doesn't stay compelling for long and the predictable lyrics just aren't that enticing. I hope the talented Katelynne Cox hangs around, but she will have to break out of the stereotypical pop rut before she can move forward.

Today in the music industry it seems the younger the singer, the more marketable they are. Red Hammer Records decided to jump on the bandwagon this past December, signing the teenage Katelynne Cox. Luckily, this young singer brings significant talent with her to the recording studio. The album overlaps a couple different genres. The opener and album's namesake, "One Girl," has elements of R&B and even rap, while the very next song is a radio-friendly pop song. Other songs flirt with heavy dance beats and even soft piano ballads. This variety helps each song distinguish itself from the others, although most songs still fit comfortably within the "pop" label. Occasionally, the vocals come off as a little overproduced. A simple YouTube search sends back samples of Katelynne Cox showing off her impressive vocal range, which sometimes feels cluttered with equalizers and autotuned sections on the album. Lyrically, the songs are about things you would expect a 16-year old Christian girl to sing about: God, boys, and love. Katelynne's music won't appeal to older listeners, but to be honest, they were never expected to buy it. The demographic her music is targeted toward, however, will be positively giddy about their purchase. - Jerold Wallace, 3/4/11