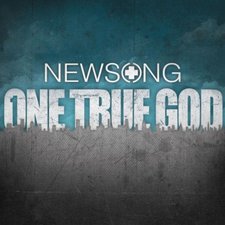 When it comes to pioneers of Christian music, NewSong fits the bill perfectly. Now in their third decade of their career, the adult contemporary group has seemingly only gotten more popular with time, with quite a few hits to their name (the most famous being the seasonal favorite "The Christmas Shoes"), along with keeping themselves visible with their annual Winter Jam tour. After such tenure of ministry, one would think they would progress their musical approach beyond a standard A/C sound, but One True God proves otherwise.

Of any issues one could have with NewSong, no one could ever accuse them of being lukewarm. The indisputable message of the hope of Jesus is crystal clear, whether it is exhorting believers in missions ("The World Is Ours To Love," "Strong City"), declaring His majesty ("One True God," "Love is the Medicine," "Between the Cross and Crown") or encouraging the discouraged with His forgiveness ("The Same God," "Why Worry"). In this regard, NewSong obviously intends goodwill for everyone who listens to them, and with additional impact of their testimonies in their live shows, truth is always spoken to the unsaved. With this context in mind, the songs found in One True God have nothing but good intentions attached to them.

Despite the positive message NewSong portrays, it does nothing to help the lack of musical or lyrical complexity behind them. The opening title track tells anyone all the essential information they will get from the entire album. With a standard worship chord structure and a painfully straightforward chorus ("You are the one true God, King who reigns on High/no one will deny that You are the one true God/time will only prove that You are the one true God"), it begins the record on a dull and uninsightful note. "Love is the Medicine" is no improvement, following the exact same song structure ("Oh, love is the medicine/there's a hurting world in need, Jesus is the remedy"). There is nothing wrong with ministry-minded mentality, but when the songwriting leading into their final result is lacking, the overall quality of the product is tremendously low. Simple as it may be, it leaves little artistic merit behind, and the rest of the album doesn't fare any better.

For the one instance that NewSong opts for something different on One True God, the result still falls on its face. The ballad "The Way You Smile" is a cross between a preteen devotion on chivalry ("the way you open the door, you always see about me/you treat me like I'm a princess/boy, you're so sweet") and an otherwise trivial love song with easy half-rhymes ("We're like true lovers in a sweet romance/you're my leading lady and I'm your man/you can say 'I love you' with just a glance"). It doesn't help things either when the considerably-younger Francesca Battistelli is on the receiving end of the words; despite her immense vocal talent and her mere presence in the song being a breath of fresh air on the album, her part doesn't save the song's awkwardness and predictability.

One could argue that One True God was never meant to be a highly profound project to provoke deep thought, but such a proposition begs to ask what their intended purpose was. With this material at their side at shows such as Winter Jam, the band has led thousands to faith in Christ, and such results are nothing but praiseworthy. But as God calls His people to aim for their fullest potential, the question needs to be asked; has NewSong aimed for theirs? If projects such as One True God, while paired with their live shows, are instrumental to saving the unsaved, the result is inarguable. But every album should be able to stand alone as a piece of art. If they challenged themselves in their songwriting and aimed for a more artistic statement of faith, NewSong could undoubtedly achieve so much more.