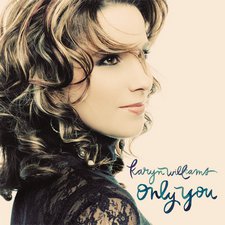 Karyn Williams
Only You

2012 was a pretty strong year for music in general, but especially for female singer/songwriters. With the likes of Audrey Assad, Kristine DiMarco, Sarah MacIntosh, and Natalie LaRue offering up above-average pop efforts throughout the course of the year, there was plenty to get excited about in the spectrum of the genre. But in the middle of all these efforts, the album Only You was released in August to digital music outlets without much fanfare. After taking a step of faith in walking away from a career in real estate, Karyn Williams ventured to Nashville to begin her music career, and Only You marks Williams' first fruits of her labor as a signed artist on Inpop Records.

To Williams' due credit, Only You works as an honest reflection of the matters on her heart, and her transparency comes across in many forms, whether it's accepting reality in light of God's perfect plan ("Enough For Me"), her hapless attempts to stay in God's graces in the midst of grace itself ("Banner") or even just asking God 'why?' ("Waiting in the Rain"). Surely many listeners can connect with these subjects, and while these songs never analyze these issues very deeply, the heart of Williams' intent is unmistakable. Most notably, "Just May Be" serves to promote the goodness of adoption. Williams paints a very real picture of adoption's ability to rescue children from loneliness and spiritual darkness, and it's a convicting message ("You just may be the answer to a prayer/the one to meet a need/and you just may be the only heaven some will ever see"). While the vignettes of actual adoptions she describes in the song are very descriptive, they are almost too specific in light of the "general idea" methods of every other song on the album, and this change in approach sticks out like a sore thumb in the context of the album's whole. And lamentably, this is only one of the album's major inconsistencies.

It's difficult to call Only You a distinctive release from a musical standpoint. The unintended side effect with all the excellent releases mentioned above, of course, is that they make the less accomplished ones pale in comparison, and unfortunately, Only You falls victim to this outcome in painstaking fashion. Only You's atmosphere, in a word, is uneven. At one moment, we'll get an easy listening pop track with a 90's guitar strumming ("Every Good Thing"), but the next will be a power ballad complete with strings and a sentimental piano introduction ("Rest in the Hope" and "Waiting in the Rain"), with a faux-vintage melodic track with a chiming beat in the mix to keep things bouncy ("Banner") . "Possible" even resembles the musical aura of Audio Adrenaline smash comeback hit "Kings and Queens" (with perhaps a dash of Fireflight thrown in). While none of these individual musical styles are exceptionally underperformed, they definitely aren't positively exceptional otherwise, and the flow of all of these tracks is erratic at best for a contemporary pop album. To add to all of these shortcomings, Williams' voice, while certainly accomplished, sticks a little too closely to the radio formula, regrettably matching the blandness of the music in the background. These sorts of issues add up to a severely uninteresting album, and Williams' talent isn't done justice.

Overall, Karen Williams has polished her tracks' production quality to a blinding sheen, but with an unfocused musical direction, mostly surface-level songwriting, and very few risks taken, Only You isn't a notable pop album in most noticeable areas. While Williams' work obviously caters to the Christian radio crowd, it's still hard to get around the fact that better pop material deserves far more attention (that still receive airplay, no less) and that Williams is trying to place her footing in this genre. Only You may not be the most worthwhile release, but when Williams picks her niche and fully develops her take on it, her talent will surely shine through.