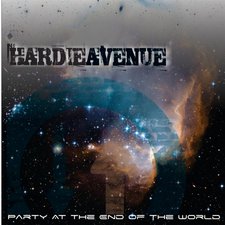 Hardie Avenue
Party At The End Of The World

Created in 2005 and having previously released three albums, either independently or on an independent label, Hardie Avenue, has been seeing a slow and steady increase in popularity from the days of their formation in Seattle and their move to Tulsa in 2009 (with only lead singer Yuriy Mayba making the move, having to find more band members upon arrival) to their now-fourth full length album, and first to be distributed by Syntax Records, Party At The End Of The World.

Now, when one hears a name like Party At The End Of The World with stars and space clouds on the cover, one immediately has an idea of what it probably will sound like, particularly when the band that puts out such a record is called "Hardie Avenue." I'm sure most are imagining some sort of cosmic dance pop/hip hop album along the lines of, say, Group 1 Crew, or even some fun dance rock like Family Force 5. But the actual effort here is a more surprising one, and unfortunately, not in a very good way. The electronic pop/hip hop is definitely there, but as immediately shown by the opening title track, it falls flat by not having a full-enough sound to be able to pull it off well, sounding sorely under-produced. Frankly, it is a sound that the band does not sound comfortable with (and as I understand it, this is their first attempt at such a sound, and I think it shows). In the past, their material has been more along the lines of pop/rock/worship with a bit of a grunge sound (not unlike Kutless), and the ballads like "I Will Die By Your Side," "Now I Say," or "To Live Like You" show where their comfort lies. The lyrical content is a mixture of depressing and worshipful (although a more full sound would probably make it less depressing). Between more worshipful choruses, they tackle issues like depravity, disunity in the church, and Christ's sacrifice for us out of love. Again, it is not unlike the lyrical content of early Kutless albums like Sea of Faces or their self-titled record.

In the end, while you can't put down the band for their message and what they intend to do with their music, I simply cannot be honest without saying how unsatisfying this record is on a musical level. They simply are trying to imitate a sound that they don't really know how to do well. I sincerely applaud them for trying to branch out in this way (quite frankly, we don't need another Kutless), but they were not prepared to branch out in this way. Perhaps if they can fill out their sound more, or perhaps try another genre to branch out into, they will put out a much more satisfying record.