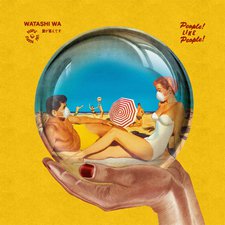 
Its a tale as old aswell, just a couple of years, really. Pop rock band Watashi Wa started teasing a reunion a few years ago, and then the world shut down in the wake of a global pandemic. But now, on the other side, one of the darlings of Tooth & Nails EMI era has finally returned after sixteen years, rejoining the label for their long-awaited sixth album, People Like People.

For those who may be new to Watashi Wa, they started as a Noggin Toboggan-esque punk band on Bettie Rocket Records, only to switch to a fantastic pop-influenced alt rock sound for their original (and short) Tooth & Nail tenure. Two decades later? Well, Im not sure they know what they want to be. People Like People is a bit of a hodge-podge of sounds that almost seems like the band wrote several EPs and then just smashed them all together. The sometimes dramatic leap from one genre to another with each new track is a bit jarring, and quite the letdown, considering it often comes when theyve just found their groove. Many of the songs are individually quite good (Zombie, Trust Me, Moving On Up, and the super fun Rollerblading), but they arent in the right context to make an overall strong or cohesive album. The little soundbites and cassette tape sounds interspersed throughout also dont help.

Outside of the music itself, my biggest disappointment with this album is twofold. First: the guest list. When this album was announced, the teaser video on social media showed a slew of guests, including Relient K, Anberlin, Gasoline Heart, Noise Ratchet, and Dogwood. That is a sure-fire way to get a bunch of Tooth & Nail kids pumped up! But to find out that the members of those bands were basically relegated to harmonies and background vocals? And that theres really only two songs where the guest vocalist is really noticeable at all? It just added another level of being completely underwhelmed by the album.

Second: the lyrics dont really hit the target for me. Regardless of the stance or politics, Im almost always turned off by someones songs about Covid or the pandemic. Several of these songs are Covid-centric, and it makes me want to skip to the next track. Its unfortunate, too, because these songs are otherwise lots of fun, like the short and sweet punk rock track XCovidX, which brings The Blamed to mind. You might expect a worldwide event that affected billions to result in widely-relatable songs, but they dont click; I even struggled to relate to the songs that make no mention of Covid. I do appreciate Land of the Free and its relatively interesting take on how our society is failing, as well as Zombie and Trust Me, which are poignant and rather deep songs about addiction to being constantly connected. But then we have songs like How Will We Live? and Let Me Prepare You; perhaps Im bad at interpreting lyrics, but I dont know how to begin explaining what these songs are about. This isnt always a big deal, but when the music in these songs is this uninteresting, its a lot more noticeable.

Most of the Tooth & Nail band reunions over the last few years have been really exciting. From Slick Shoes Rotation and Frequency to The Blameds The Church Is Hurting People, there havent been any notable missteps. So with this in mind, and considering the high quality of their past work on the label, its quite surprising that new Watashi Wa music would let me down so drastically. People Like People is a unique album in Christian music, but its also a difficult one to enjoy. Perhaps future endeavors will be more palatable.

While People Like People may not be the Watashi Wa reunion record fans hoped for, the band has actually managed to craft a really fun album from top to bottom. That isn't to say it's not without some missteps -- "Xcovid19x" is still pretty obnoxious, even if I can agree with the attitude they're going for, and the little interludes (including "Media Station (Demo)") just feel like fat that could have been trimmed for the sake of cohesion -- but I've found, with each listen, that People Like People is a delightful pop rock album. While "Trust Me" is the only song with blatant spiritual content, most of the record is upbeat and a reminder that we're not alone in this crazy world. Highlights include the really fun tracks "Let Me Prepare You," "Zombie," "Who Who Hu (Man)" and the KIDS.-esque "Moving on Up." Sure, it's not a perfect album, but I keep coming back to it and definitely recommend checking it out. (Just a note of warning that "Zombie" includes a use of "p*ssed off") - 5/20/22 John DiBiase