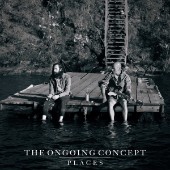 
If I could think of one band that truly mimics their namesake, The Ongoing Concept would definitely be that band. Album number three, Places, features the band doing what they do best -- changing it up. Sure, there is some familiar material present, but overall, it showcases the ongoing evolution of the band sonically and stylistically. When I first found out that the entire band, aside from Dawson, had left, I thought for sure they would be dead in the water. However, Mr. Scholz, and his new bandmates, have continued in TOC's tradition of releasing excellent music.

The album opens with the title track, which is used as more of an intro than anything else. The ambient keyboard fills the beginning before a smooth guitar lead enters the mix. The guitar sound is more like John Mayer than anything related to heavy music, but it leads nicely to "You Will Go." Some of the pop sounds found on Handmade surface in this relatively tame number -- at least tame in the first half -- but Dawson's shrill screams dominate the second half, repeating, "The places you have been make you who you are. The places you will go make you who you will become" at the end. From there, more pop influence shines through with "Shake It." Think along the lines of a more metallic and vocally aggressive version of Dirty Loops for these two tracks. Way back in 2013 Dawson exclaimed, "Stop being the print of someone else's painting" in "Cover Girl" -- a song about being original in a world of copycats. Present day, "Print" opens in a similar fashion with Dawson urging folks to "gather around again." The track kicks in full speed just like "Cover Girl" and goes on to be to a "print" of that song with Dawson exclaiming, "I am the print you know; the print of something original. I am the print you know 'cuz I gotta keep it super simple." The song is a fun walk down memory lane and is a personal favorite. "Off the Cuff" and "Domesticated" follow in the same vein as the first couple of songs, but "Bargain" makes a huge statement.

"Bargain" is a piano-led ballad with a nice clean guitar lead to complement. Scholz sings, "I don't know if I am keeping my end of the bargain" in a song that is full of retrospection. Dawson sings wonderfully in this track and the softest number of the album is truly captivating, taking you to his melancholy state. I'm unsure if the track is aimed at his former bandmates or is just a general song about life experiences. "Owe Me" picks up the pace tremendously as a full out assault opens the song. It's a fast and hard rocker that raises the intensity as the most metalcore type track present. Next up is the funk inspired sound of "Punisher." The verses have a super funky vibe and the chorus picks up with a heavier sound, but the song hits its highest point at the breakdown towards the end. "Spirit Lake" closes the album out with a more 90s alt-rock feel. Dawson's vocals are impressive again in this track and, again, the guitar lead is perfect, however, the musical interlude is where it shines brightest in its beauty. The song, and album, abruptly, and strangely, ends with the sound of water washing over the track as the music is building out of the much softer interlude.

The music composition on Places is nothing short of brilliant. While a cursory first listen may lead you to believe this is Handmade II, a deeper listen will quickly show you that this is simply not the case. It seems all of The Ongoing Concept albums are mini-concept albums in and of themselves. Their third is literally a look at the places the band -- especially Dawson -- has been. From the Easter egg filled video for "You Will Go," (containing elements of all of their previous videos and album artwork), the obvious throwback of "Print," to the complete retrospection of "Bargain," Places runs the gamut of The Ongoing Concept's history. The album is a bit of a grower, but it's stellar. The instrumentation is insanely good (and complementary of itself) and the vocals continue to improve from album to album. Whatever the reason, I'm sure the transition of being in a band with your two brothers and childhood best friend, to having all of them leave at once, is sobering. However, Dawson and the new band shine through it all to deliver an album worthy of The Ongoing Concept's name.

The Ongoing Concept has been perhaps the most exciting new band Solid State has signed in a number of years. That's not to say the label has a weak or unexciting roster these days, but The Ongoing Concept is so hard to pin down, as they present a beautiful hardcore sound that isn't afraid to stray outside the lines of what "hardcore" means. The band's sophomore release in 2015 was an excellent display of talent, musicianship, and intensity, but it was a rather quick endeavor that, if you're anything like me, made you want a lot more. The wait has felt long, and the band has changed quite a bit, but Places is finally here. Picking up literally where Handmade left off, The Ongoing Concept is true to its name; they have a way of making each album feel like one ongoing concept. They also have a way of making heavy music exciting. Fast and heavy hardcore (complete with blast beats and intense screams) meets head-on with southern rock, alternative rock, and even dance music. The undeniable groove and funk influence of "Shake It" and "Punisher" is, as far as I know, something that no other prominent metal band is doing. There's even a little bit of jazz and swing at the core of "Domesticated." But then you have songs like "The Print," which is a fast and furious, in-your-face hardcore frenzy. It's also a bit of satire and a reference to their debut single from Saloon, "Cover Girl"; "The Print" continues to promote their stance against just copying the sound of other successful acts. Thankfully, these guys are still blowing us away with their creativity on this third outing, and I'm sold. I'm with this band for as long as they continue making music. - Review date: 10/4/17, Scott Fryberger

Always the ones to reinvent themselves, The Ongoing Concept are three for three with their latest metal frenzy, Places. This time around, the band chooses to focus on the more melodic, jazz-centric moments of Handmade to craft their sound. Although Places is excellent in its own way, I cannot help but miss the uncontrolled aggression that underscored their previous material. Even so, Places is another impossibly infectious release and one of the best heavy albums of this year. - 10/17/17, Lucas Munachen of Jesusfreakhideout.com