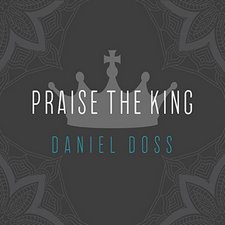 The album begins with the title track, "Praise The King." With southern vocals much closer to the forefront and tight sounding arrangements, Doss's worship leading background is clearly at work. Most any of these songs would fit comfortably in a praise and worship radio rotation. Rather than just power choruses that don't say much, "Belong" and "Light Rise Up" continue the album with reminders of the work of the cross and of grace. Most of this album consists of piano driven melodies and "Trust" continues in that vein, while "You Hold It All" attempts to build into a powerful chorus. The slow building song "Anchor" comes out as a gem, with male and female vocals trading and playing off of each other to a powerful melody. Even though lyrically rich, "Roots Run Deep," "Stained Glass Windows" and "Victorious" blend together in a similar styling that plagues many of the songs off the album with little to separate them from each other. "Brother Come Close" closes out the album on a strong note. While arguably not a worship song, it is one of the highlights of Praise The King, with Doss's vocals front and center giving their thickest southern sound. With truly piercing lyrics, the song challenges, "What you gonna do when that rooster crows? / Said you never would but you been exposed / And when He looks you in the eye you know He knows / So what you gonna do when that rooster crows?"

While nothing about these songs jump out at first listen, the album flows smoothly from one song to the next under the direction of this worship music veteran. With only 10 tracks and about 40 minutes worth of music, it's not difficult to listen to in one sitting. Probably the biggest drawback to the album is also what works best in its favor: nothing stands out. Almost every track sounds similar to the last. While this makes for great background music, it's also not hard to make it through the album a couple times and still have trouble differentiating the songs apart from each other.

So what's good about Praise the King? Doss delivers a musically tight worship album drawing on over 10 years in music ministry. What's not so great? Little about this album draws you in. Instead, much of it could easily be music played gently during an altar call; good for listening, good for worship but nothing electric.