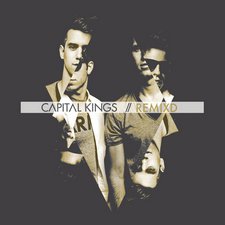 The world was first introduced to the name Capital Kings when the duo started making remixes for popular CCM artists like Mandisa, Britt Nicole, and tobyMac. Last year, the electronic team of Jon White and Cole Walowac released their self­titled debut album with much success. After multiple touring opportunities like Winter Jam 2013 and tobyMac's second Hits Deep Tour, Capital Kings decided to have their own work remixed for a change. Welcome REMIXD by Capital Kings, a chance to hear some of the group's best songs redone, as well as a look at what may come next in the form of their newest single, "Be A King."

The opening song, "All The Way (Neon Feather Remix)," ended up being one of my personal favorites, in which a low­key techno pop song becomes a happier­sounding dubstep wonder, accompanied by a beautiful synth lead. Awe was followed quickly by slight disappointment, however, when my previous favorite Capital Kings song was turned into a bit of a letdown in "We Belong As One (Family Force 5 Remix)." Don't get me wrong, Slow Glow Activatur did a great job as far as the remix quality. Nevertheless, this remix just did not seem to measure up to the original, especially when tobyMac's rap was taken down an octave or two. While I thoroughly enjoyed the new electronic/hip hop sound in "Living for the Other Side (Nico Stadi Remix)," it eventually ran into a repetitive 7-minute slur of the same three lyrical sections of its predecessor. Jumping back up a notch, the winning remix in Cap Kings' "I Feel So Alive" chapter of the U:Remix contest has always been a personal favorite, containing some amazing dubstep sequences you'll never forget, and it's a great addition to the track listing here.

While I still found favor in the new rendition of the chorus of "Ready for Home (Smile Future Remix)," it feels too similar to the original and not quite creative enough to be taken entirely seriously. "Born To Love (McSwagger // Cap Kings Remix)," on the other hand, is a completely different story. This remix is one of the best on the list. Its darker feel and more hip hop percussion sound, followed by the trap dubstep section after the chorus, prove a welcome surprise. The highlight song however, would be the new single, "Be A King." Since the first album, this song definitely shows maturity in Capital Kings, and the theme is a beautiful one, referencing the group's name in a clever and wonderful way.

REMIXD ends up being an amazing twist of the rare case in which remixers get remixed, and it will be an enjoyable addition to any Capital Kings fan's music collection. Minor errors are not to be taken heavily: Capital Kings did a great job with this project, and the latest single "Be A King" is a fantastic preview to what is soon to come from this electronic duo.