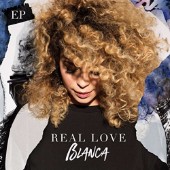 
Since leaving Group 1 Crew in 2013, Blanca Callahan has successfully established herself as a solo artist. With a debut EP and eponymous album already under her belt, she returns with Real Love. Written after her mothers' passing due to cancer in December 2016, Blanca has a great deal to communicate about her faith journey, her need for God, and more. With fans poised for a 2018 release of album number two, Real Love does an exceptional job of filling the time in between now and then, whilst being a strong project in its own right.

The EP kicks off with the title track "Real Love," in which Blanca's punchy vocals really contrast the slowly-building instrumental. It's clear that Blanca has had enough of seeing "faith turning into a show." She uncompromisingly denounces the frills of religion in favour of yearning for Jesus, and His real love. This track is sure to inspire conversation.

The next four tracks on the EP are very much feel-good pop tracks, bound to be memorable due to their catchy melodic hooks, driving rhythms, groovy drums, all encompassed with Blanca's stunning vocal and lyrical talent. The lyrics are honest, and many fans will find them incredibly relatable. Most notably among these are lines such as, "I get these thoughts inside my head / What if I don't have what it takes" from the song "What If." There are beautiful harmonies dotted throughout, and plenty of big choruses that make you want to dance. The great thing about these tracks is that there is enough variety between them to make each of them unique by themselves.

The final track on the EP is entitled "Give It All" and features Dominican Christian hip-hop artist Redimi2, whose verse I would have liked to have been slightly longer, but besides that, there is very little that I can say about this album of a negative nature. Current fans will enjoy it, but if, like me, you are unfamiliar with Blanca's music, you will be pleasantly surprised to have discovered one of the strongest female voices in contemporary Christian music.