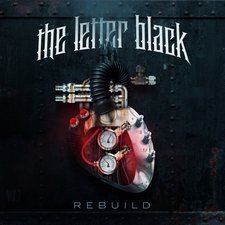 Before anyone assumes I hate The Letter Black, let it be noted that I listened to and later reviewed the band's solid, independent album Stand when they were called Breaking The Silence. Obviously, the group changed their name to The Letter Black when they signed with Tooth & Nail Records, and I was very interested in their EP in 2009. The female fronted band had potential, and I was disappointed to see a below average effort from the band with their debut album (Hanging On By A Thread) with T&N. Since then, the band has actively toured and released small projects leading up to their next album, Rebuild.

From the start, Rebuild has a tough time gaining momentum. "Sick Charade" tries to be an opening heavy hitter, but there's more to a fiery rock song than just big guitar riffs and screams in the background. At some point, the lead vocals need to pitch in, the monologue in the bridge has to be dropped, and the chorus has to flow. None of these things occur, and listeners are left with the uncomfortable feeling that the band is trying far too hard to reach the ranks of RED and Skillet.

Songs like "Breakout" and the title track also try hard to become convincing rockers, but there's no creativity. In addition, the lines the lead-singer Sarah Anthony is forced to sing are impassable road blocks (I'll speak more on that later, but, the lines are so distracting it even affects the impact of the music). To be fair, not every heavy song is a wash, and the best example of a highlight is "Up From the Ashes." The song's initial stanza is unremarkable and the repetitive pre-chorus is annoying, but the refrain is quite good. In most instances, Anthony's inconsistent vocals aren't strong enough to carry the heavy music, but she does her best work in the catchy chorus in "Up From The Ashes."

The album shines most with the softer material. "Found" isn't a bad ballad, but "The Outside Looking In" is probably the strongest track on the whole album. The piano sprinkled in with the electric guitars works well, and the song feels more emotionally infused than a standard, obligatory ballad.

Sadly, the lyrics are the weakest component of the album, and there are so many reasons why. At the micro level, the songwriting is painful, with lines like "sometimes you need to shout out/let them know exactly what you're all about," and "you won't let go/you're losing control" and "you think you know me/you don't know who I am" scattered across the album. The phrase "I'm killing pain in the name of love" dominates the chorus of "Painkiller" again and again. The phrase "could it be luck of the draw/or could it be the fate of us all" might sound inspired, but Anthony delivers the line without any passion.

If we abandon the song snippets and focus on the messages on Rebuild, there are greater problems. Although there are some nods to God, the project lacks a strong spiritual influence. Songs like "From the Ashes" subtly allude to needing God's help, and "Rebuild" appears to be a less ambiguous cry to the Lord despite its dependence on pronouns. "Found" is definitely a hopeful song, but the hope and the reason for the hope is open-ended, without definition. Singing about positivity and hope is ultimately empty without the context of Jesus Christ, and the album doesn't strive enough to create that context. "Breakout" represents a handful of anthems on the album that have been written by dozens and dozens of artists before The Letter Black. The theme "I'm right here/I'm facing my fears/it's right now/it's all going to turn around/I'll never walk out/you'll never see me run away" is cliché and either needs a new approach or to be retired forever.

Finally, the band has said Hanging On By A Thread was about "the healing process and being at rock bottom," but this new album is apparently about conquering hurdles in our lives. However, although the band claims to move forward with this album, it feels and sounds like they are covering old ground. For example, "Moving On" debuted on the Breaking The Silence EP and it was an angry letter to someone who had abused the lead singer. Several songs echo that same theme four years later ("Sick Charade," "Shattered Soul," and "Branded"), and it's disappointing that the group must dwell on these mean spirited people rather than move on.

Based on my own experience, the band has potential. However, The Letter Black showcases most of their talent in their soft, poppier music than in their rockier material, and maybe their musical strengths are better off in the pop/rock arena. It's difficult to discover talented female-fronted rock groups within CCM, but every album from Fireflight, Flyleaf, and even Icon For Hire are better, more enjoyable rock albums than Rebuild. Still, even if this was a top notch, hard rock effort that put even Skillet, Red, Thousand Foot Krutch, and Pillar to shame, the weak songwriting is more than enough to drive potential listeners away. Every message, every theme on Rebuild has been poorly recycled from good (and bad) artists. With so little improvement showcased on Rebuild, it's difficult not to dismiss The Letter Black's sophomore album as a wasted effort.

The Letter Black returns for a second endeavor with Rebuild. Unlike their first full-length album, this one contains all new material. Listeners (just like this reviewer) look forward to the second stage in a band's life in hopes that the artist will either provide a worthy follow-up to an already outstanding debut or simply improve from a band's first project. "Sick Charade" begins as a promising opening tune that hammers with a catchy rhythm about one standing their ground in their stance with God. The next track, "Breakout," is a weak follow-up that has a simplistic tempo that never varies much throughout the entire song. "Pain Killer" doesn't fare any better as it has the lyric "I'm killing pain / in the name of love" overused to a point where you'll soon be looking to skip to the next track. It's disappointing because "Invisible," "Hanging On by a Thread" and "I'm Just Fine" were much more refined and satisfying songs to listen to on their previous album. Rebuild has its moments where it shines, though; "Found" is proof that The Letter Black can perform a song that is beautifully executed and seems to fit them well. Sarah Anthony's vocals seem more suitable for the lighter side of the music, or at least she seems more natural as revealed in "Shattered." It's nice to hear Mark Anthony's vocals join in as they complement each other perfectly in this song about resisting any thought of giving in to the Devil or having any unwanted relapses. "Outside Looking In" is easily the best song on the entire release and shows promise for future albums.

I was looking forward to this album because The Letter Black's Hanging On by A Thread seemed more hopeful and engaging. Rebuild doesn't seem to deliver as the title would insinuate pertaining to a superior effort. It makes one wonder what results would exist if a legendary producer participated in their next recording, because I still think The Letter Black has promise and hopefully they can provide a fresh experience on their next event. Rebuild does offer a few memorable songs, but unfortunately, it's not enough to save the entire record and listeners will find a better experience with other female fronted bands like Fireflight and Icon for Hire. - Wayne Myatt, 11/14/13