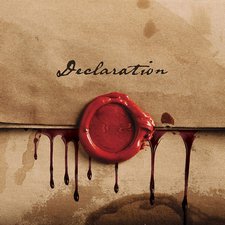 
For fans of Christian rock, Red is an instantly recognizable name. Since the release of their widely acclaimed debut, 2006's End of Silence, Red has gone on to release consistently excellent material with very few missteps. Their career highlights excel through their use of dramatic tension, emotional catharsis, and visceral energy. For Declaration, their first full-length independent outing, they've refined their strengths and capitalized on the elements of their sound that have made them a continually engrossing act.

One of the most immediately surprising aspects of Declaration is how heavy and in-your-face it chooses to be. Michael Barnes has grown significantly as a vocalist and he has the chance to unleash some incredible screams throughout the record; this might be most pronounced on the ferocious "Infidel." A prolonged scream gives way to a pummeling barrage of riffs before falling into silence for the verse. The chorus itself is everything fans have come to expect from Red. It's chilling, cinematic, and melodically soaring. Fans will also be greatly pleased by the return of strings interspersed tastefully throughout the record and all excess (i.e. the EDM and industrial touches of Gone and Release the Panic) has been stripped away.

Declaration is by no means an experimental outing for the band, however, multiple listens reveal a creative depth that Gone had somewhat lacked. "Infidel" and "Cauterize" feature melodies in the pre-chorus that are unconventional and layered with vocal effects. "Float" could very well be described as a post-hardcore song, including verses that are entirely centred on Barnes' harsh vocals. Likewise, "Only Fight" is a highlight that boasts a vicious, fully screamed chorus. Most intriguing is "The Victim," which opens with a xylophone masked by an ominous electronic beat. This is then used as an instrumental refrain before its most intense moment. It's small, unique details and original twists like these that make albums like Declaration more rewarding with every listen.

Lyrically, Declaration is about the internal struggle of the spirit against the corruption of our human nature. Many times, I was reminded of Matthew 26:41, where Jesus warns His disciples of the war within them: "The spirit is willing, but the flesh is weak." "The War We Made" best encapsulates the album's theme, where confusion gives way to desperation and an understanding of our brokenness. The war inside of us is not something we can overcome by our own will and volition, but by a power greater than ourselves. "Waking up from myself / To a life outside this hell / No more lies, no more pain / You can't fight the war we made." This theme is continued in "Float," that in always fighting and warring against ourselves, we're missing the Saviour who has been waiting for us all along. "Like you could feel the nothing / Like you could ever float / Fighting the fear / I am letting go, letting go / It's already here / I am letting go, letting go." The war for our souls will never end, but we will always find our victory in the finished work of Christ. In times such as these, this message is timely and very much needed.

Declaration may just be a new standard for Red. An emotional ballad akin to "Of These Chains" and "Hymn For The Missing" would have been a welcome inclusion, but as it stands, this is quite easily the rock album to beat this year. Existing fans will be thrilled and it may even win over a few new converts. However you choose to listen, I highly recommend you do.

Much ado has been made of the members of Red ending their major-label contract with Sony/Essential and tossing their hats into the indie artist arena. That being said, despite the ostensible opportunities for expansion that this sort of move offers, their latest album, Declaration, still adheres pretty closely to all of the hallmarks that have, by this point, become the band's stock-in-trade: throat-shredding vocals; sludgy, lumbering guitar work; and stark, warts-and-all lyrics that detail the inherent darkness lurking within the human heart.

That said, while many of its songs sound similar enough to the average back-catalog composition - and each other - to wind up bleeding together into a somewhat monochromatic mélange, portions of the new effort do distinguish themselves in terms of hook and melody. Indeed, ironically enough, despite Declaration being touted as the group's heaviest offering in some time, its most memorable moments come when the foursome dials back the non-stop sonic barrage and focuses on subtlety, tune and dynamics, as it does on entries like "Sever," "Cauterize" and slightly Eastern-tinged "Only Fight."

Over the years, the band's unremittingly bleak lyrical slant may have, understandably, become a bit dispiriting to some listeners. While there's not a lot of light to go around this time out either, tracks such as "Sever" ("Watching your slow demise/ Sever these fraying ties") and "The War We Made" ("Stop waging war with/ All I thought I wanted/ All I thought I needed") manage to interject at least a smattering of hope into the proceedings.

Fans of the first few albums will surely appreciate Declaration's back-to-basics approach, and the project is certainly the quartet's strongest showing of the last half-decade. Even so, it's difficult to hear older songs like "Perfect Life" and "Die for You," or even last year's cover of Fuel's "Hemorrhage," and not wonder why the band so rarely chooses to display its surprisingly impressive alt-rock proficiency. All of which may well mean that, when archeologists unearth the Red catalog in its entirety 100 years from now, they'll discover, as some of us are just now beginning to, that Release the Panic was a far better record than we first imagined. - Review date: 4/10/20, Bert Gangl of Jesusfreakhideout.com