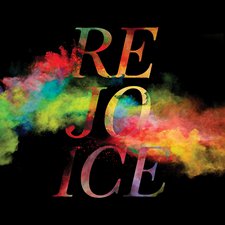 
Live worship albums are a bit of a rarity these days, right? Well...no. From yearly Passion albums to what now seems like monthly offerings from various Hillsong and Jesus Culture entities, you could probably fill up an iPod classic with what's been released in the last five years. Exaggerations aside, they really are extremely common, and sometimes, you get one that's actually not bad. In this case, I'm referring to BEC's new sampler-of-sorts Rejoice: Live From Seattle. Featuring former Mars Hill bands in a live setting, it's a solid line-up, but the end result is a bit of a mixed bag.

Rejoice starts off with the energetic title track, which comes from Dustin Kensrue's The Water and the Blood; it's also led by Kensrue himself. In fact, he actually leads three songs from the first half of the twelve-track album, which makes sense given that most of them are on the aforementioned Kensrue album. He can also be heard on background vocals on the second track and fourth tracks, "Jesus!" and "Rock of Ages," respectively, both of which are lead by a singer named Hannah Garvey (who appeared on the recent BEC compilation Christ Is Risen). His popular modern hymn "Grace Alone" makes an appearance here, though something about this particular version is less appealing than any of the previously-recorded versions.

At the halfway point, the tides are shifted from Kensrue's performance to a few songs I tend to associate with Citizens & Saints. Garvey comes back in for a more southern-esque rendition of "Made Alive," and then it slows down dramatically for "In Tenderness." This is when The Sing Team's Brian Eichelberger comes in with just a guitar and his voice; and, of course, since this is a live album, the audience is present with their vocals as they all come together to worship Jesus. Eichelberger moves into The Sing Team's rendition of "Oh! Great Is Our God!" which is a version to which I needed a long time to warm up. I may like it more than Citizens & Saints' rendition at this point, but regardless, it's a solid song either way, and it can provide for a sweet moment of unabashed praise toward our Savior. The pace picks up for the last couple of songs, as Ghost Ship's Cam Huxford comes in with the upbeat "Mediator," which doesn't differ too greatly from the album version. A quick interlude then leads us into the album's final track, "Christ Is Risen," which also bears a striking resemblance to its previously-released version, which was also live.

Now, as I mentioned in my very recent Christ Is Risen review around Easter, the Tooth & Nail family, including BEC, is infamous for re-releasing songs until sometimes you just can't stand it. While the former Mars Hill groups make an excellent addition to BEC's roster, Rejoice is, unfortunately, just another example of this, albeit in live format. In fact, a few of these songs were on Christ Is Risen as well. That being said, it is nice to hear live renditions of these songs and to get a feel for what these bands would sound like if getting a chance to worship with them in person. Though it does sound, at times, like the bands were focused on putting on a show, which I feel shouldn't be incorporated into worship, I can't really say for sure that they were; it may go without saying that I was not in attendance at this event.

Since Mars Hill Music teamed with BEC, their bands have released consistently good music; from Citizens & Saints' self-titled debut as Citizens to Dustin Kensrue's first worship album, I've enjoyed just about all of it. If you feel the same way, then Rejoice: Live From Seattle is something you'll want to invest some time in. Don't expect any new material, but it may give you an itch to see these bands in a live setting.