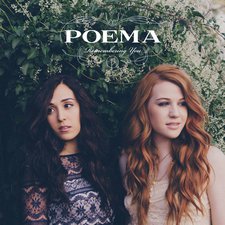 Since their signing to Tooth & Nail Records a few years ago, Poema has provoked interest in the market with ways that few T&N signees have. A label that's prided themselves in edgier alternative music at first isn't a logical fit for an acoustic pop duo of sisters in their early twenties, whose offerings are anything but edgy or alternative. But all that notwithstanding, there's still something about the duo that beckons a second look (or third, in this case). While their debut EP Sing It Now and their follow-up Once a Year: A Poema Christmas EP were expertly recorded gems of piano and guitar-driven melodies, the pop simplicity has never leant itself to making an enduring musical impact, but Remembering You, Poema's first (and longtime anticipated) full-length album, brings the duo closer to that mark.

As previously seen from Poema's early days as an unsigned group, the sweet and refined nature of Elle and Shealeen Puckett's approach uniquely define their musical philosophy, and that's largely remained for Remembering You. The defining element to Poema's approach is the guitar-piano hybrid, and though this is the first opportunity to hear a longer setlist to test more things out and take more risks, this is the best listeners have heard of the sisters. While Sing It Now sounded reasonably polished, it merely felt like the average coffee shop indie band just with better production value, and Remembering You amps everything up with a fuller, but still finely polished, sound. A soft pop approach reminiscent of Taylor Swift and Colbie Cailatt fills the ears, but Elle and Shealeen's impeccable harmonies make them stand out significantly, and they've never sounded better.

Plenty of lyrical surprises show their face, as well, starting off with the upbeat opener "Clean Getaway." While the ladies of Poema aren't strangers to wearing their hearts on their sleeves, "Clean Getaway" is an astonishingly vulnerable track, addressing a father who devastatingly abandons his family ("If there's a single sound I'll never forget, it's your engine rumbling/I wish you'd seen the mess that you've made with your clean getaway/standing in the hallway, I hear the echo of your footsteps/blue eyes and your last name are the only things that you left"). When Elle and Shealeen sing the bridge "when I grow up I'll never be like you," the listener is convinced by the track's authenticity and brokenness, and it sets the album's tone quite well. Later on in the record is "Your Song," which changes things up with a purely worshipful offering to God, and "My Turn to Go" is a poignant song commemorating a lost loved one ("I hope you know I'll miss you so/there'll never be an easy way to let you go/I never told you, I hope I showed you you are the reason I am who I am/so I can only love you 'til I'm old, 'til it's my turn to go"). These tracks are major breakthroughs for the Pucketts and are by far the gems on the record.

But in Poema's signature style, love songs to a charmingly vague recipient are the rule of thumb here, and after the refreshingly different "Clean Getaway," the middle core of the record comprises of mostly all love ballads. To the Pucketts' credit, most of these are cutesy, harmless, and better written than most comparable love songs on the commercial airwaves, but there's still plenty they could do to enrich this subject in a way they previously haven't, and some tracks just aren't executed quite as well as they could (for example, the melody of "Hesitate" sounds eerily similar to The Band Perry's hit "If I Die Young," complete with country influence to boot). And at the risk of sounding heartless, "Would You" sounds more like the whining of a needy girlfriend than polite requests ("I want dinner made for two and you to make a move, but you never do/hold my hand in front of your friends/it's not a lot to ask and I shouldn't have to/oh darling, if you knew what to do, would you?"). As for the rest of the ballads, it's all material that can be expected: girl likes boy, but with mixed results.

Given Poema's precedent of ballads without much depth, a release like Remembering You is a bit of a mixed bag. With both more of the same and a few breaths of fresh air, the Puckett sisters still have a large amount of room to solidify their appealing concept even more, but this is a pronounced step in the right direction. With enough added dimension in sound and lyrical thought, Remembering You is Poema at their finest, and the Pucketts are well on their way to becoming Tooth & Nail mainstays.

If you heard Poema's "Clean Getaway" and are planning on picking up their sophomore album, Remembering You, based on that song alone, don't. Although "Clean Getaway" is a terrific, catchy, piano-driven pop song which includes emotionally stirring lyrics about abandonment, the upbeat style isn't reflected on the rest of the project. The rest of the album features ten more acoustic pop tracks that are quite reserved. The two main exceptions are "Fallin'" and "Play With Fire" which are bit more bouncy, but not as up tempo as the first track. If you stick around, the album's quiet ballads ("Would You" and "Hesitate") will probably begin to grow on you, but the levity provided by a couple tracks ("Wonder" and "Love Of My Life") can be a bit shallow. Speaking of which, much of the Poema's focus is on girl/guy cliché relationships. On occasion they tackle weightier topics ("Clean Getaway" and "My Turn To Go" which discusses loss), and the two Puckett sisters even sneak a possible worship song in the mix ("Your Song" leans a bit too heavily on the pronouns to be absolutely sure). In the end, Remembering You, is an enjoyable, soft pop album from the duo with enough highlights to negate the thin lyrics. - Nathaniel Schexnayder, 9/9/12