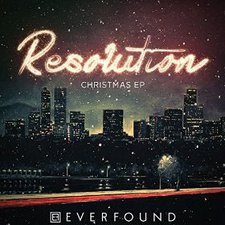 Everfound's self-titled label debut last year demonstrated that the four Russian brothers have the potential to make big waves in the Christian music industry. Only one year after their debut, the Odnoralov brothers, now down to three (musically-speaking), are presenting us with a five-song Christmas EP entitled Resolution. Their fusion of high energy alternative pop and Christmas music proves to be quite a unique combination.

Starting the album off in a monumental fashion is the instrumental version of "Carol of the Bells." The song is comprised of heavy synths and electric guitars that are seamlessly blended with organic strings and a piano in sweeping and dramatic movements. Just as ambitious is their creative take on "O Come O Come Emmanuel." The drum loop in the verses bear a R&B vibe, while the lavish synths in the chorus showcase an electronica sound. To add to the eclecticism of the song, horns are used in various spots. This fusion of sounds works surprisingly well, resulting in an album highlight. Also, Nikita Odnoralov's vocals are spot on here as he sings with both reverence and passion.

The first three minutes of "Silent Night" are pretty laid back as one might expect with this carol. In the second verse, Nikita sings in Russian with a tenderness and purity that creates quite a beautiful moment. It is a nice reminder that Jesus' birth is celebrated around the world by many cultures. Unfortunately, the song goes downhill in its last two minutes. There are simply too many instruments at play and they are all equally prominent, creating an overwhelming feeling. This could have been corrected with better mixing, highlighting some of the more interesting instruments, like the accordion and the strings, while pulling back some of the others, like the kick drum and synthesizers.

In general, writing original Christmas music is a tricky task. On one hand, you are pinning new songs against carols that have stood the test of time. On the other, not writing new material runs the risk of looking lazy. Everfound takes a stab at two new songs on Resolution. There is not much to "Resolution" other than its danceable beat, but it works as a fun and catchy holiday song. The EDM chorus and lyrics make you think more of New Year's Day than Christmas, but it still fits well on this diverse EP. The poppy "I Want Christmas Back" fairs a lot better as Nikita opens up about how the past is holding him back from experiencing the joy of Christmas: "I'm tired of the dark memories the season harbors / so lead me back to the light the season brings." Neither of these songs are particularly spiritual, but anyone who is looking for a fun holiday dance song or a hopeful anthem may find these to be right up their alley.

Resolution: Christmas is proof that Everfound is not one to stick to the formula, even their own. If you like your Christmas music with a lot of energy, this EP is definitely for you. If you are just looking for some new Christmas music, you may want to try Aaron Shust's Unto Us instead.