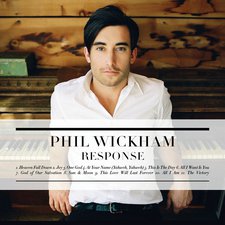 Phil Wickham seems to fly under the CCM radar time and time again with each one of his noteworthy recordings. His soothing blend of folk, pop and rock-infused worship helps fill a void in modern worship music that many artists fail to achieve. Wickham's style works as glorified poetry placed over great guitar accompaniments and ethereal tones.

Wickham's Response is perhaps his most mainstream album to date, borrowing heavily from the styles of his last record, Heaven & Earth, to present a more focused album stylistically. All of the powerful, emotion-laden songs Wickham usually brings are still there, but in a refined presentation. Wickham's vocals are as solid as they've been since he first entered the scene, continuing to make the hairs on your arms prickle with his powerful range.

The album's theme this time around focuses on our response to God's grace and love, as we plead for guidance and comfort from our wonderful redeemer. It's both a call to action and a flick on the neck to get us out of our pews and onto our feet as we take up the mantle as God's followers. The fun openers, "Heaven Fall Down" and "Joy," help set up the upbeat feel of the album that offer a good blend of synth and U2-esque guitar work.

The upbeat ditties "One God" and "This Love Will Last Forever" are two of his most single-worthy tracks, with the latter sounding reminiscent of indie group The Temper Trap's "Sweet Disposition." There are plenty of fun tracks with meaningful lyrics such as "God of Our Salvation" and the previously released "At Your Name (Yahweh, Yahweh)" to round out a good assortment of songs. The mid-tempo to slow gems pluck all the right heartstrings, with tracks like "All I Am" and "All I Want Is You" being poignant high points and should be added to worship repertoires at your church.

Another treat for listeners is the inclusion of "Sun & Moon," a song that has become a fan favorite since Wickham first started playing it at live shows a few years ago. It packs a lot of heart, with Wickham singing, "Shine your light, I wanna feel you now / God I need a miracle, take my heart, make it glow." "The Victory" closes Response in pure acoustic fashion that most Wickham fans are accustomed to from previous albums. Wickham exclaims that, "Death has been destroyed / The grave has been conquered / Jesus is risen / Life ever after." The slow pace of the song builds as piano chords sprinkle behind acoustic guitar swishes, leading to a haunting but joyous crescendo that compares to his previous hits, like "Beautiful" and "Cielo."

It would be easy to dismiss this album as a step back for Wickham, since the feel of the album seems a bit Vanilla compared to his Neapolitan past, but that would be a disservice to his talent. Wickham's songwriting is in a higher caliber than most songs on Christian radio right now, and the San Diego songster pours his heart out with solid arrangements and beautiful thought-out metaphors that feel natural and uncontrived. It's easy to dive into God's glory with Wickham on this album. It's one of the best worship records you'll get this year and you won't want it any other way.

Over the past few years Phil Wickham has quickly become an established name in church worship circles. His first two releases gave a traditional-with-mild-techno flair while Wickham's third album had us dancing to rave beats between heaven and earth. With the arrival of his fourth LP, Wickham's music is all over the place. Some of these places are incredible and some are not. Nevertheless, there are great things to be found in Response. Incredible corporate worship standouts are "Heaven Fall Down," "The Victory," and "At Your Name (Yahweh, Yahweh)." They provide simple lyrics and beautiful music that are sure to breathe life into your weekly gatherings. While the words may not sound too different than what has been sung before, the integrity and reverence within each song is so pure that they all have great depth.

On the opposite side of the beauty found in Wickham's latest release are "Joy" and "One God." Throwback 80's synthesizer and overdone percussion makes the songs sound extremely hokey. At the heart of each song is great content but because of the instrumentation, they lose their attractiveness and overall influence.

Sadly, I must say that the album as a whole does not reach the standards that Wickham had established with his previous releases. Still, there are some incredible glimpses of genius even if they take a couple of listens before they can be observed. But for this reviewer, the response is still very mixed. - Ryan Barbee, 9/29/11