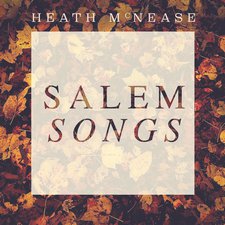 
There are several reasons an artist may want to release an album for free; they might be a new band trying promote their name to develop a fanbase, hope it will somehow stumble across the ears of someone who has the power to get them signed to a label, or, in the case of a more established artist, to give a special treat to loyal fans. Singer/songwriting and rapper Heath McNease regularly hands out his music for free, and it's for the noblest reason of all--he believes in his art so wholeheartedly that he wants to share it with as many people as will listen. He is also a workhorse, pumping out out more material than 95% of artists in the industry; in the past year alone he has released two full length projects (three if you include Fort Wayne: Stripped Down), a collaborative EP with Jetty Rae under the name Pen Pals, and a documentary. This past October McNease delivered yet another new project: Salem Songs EP.

Born out of a love for visiting Salem Massachusetts in the autumn, this five song EP is a collection of introspective personal tunes that examine man's relationship with himself, God, and others, using the town and its history as a convenient setting to communicate mankind's brokenness in each of these relationships. McNease makes historical and literary references left and right, and brings it all together with poignant thoughts like "the punishment for sin is isolation" and "hear me singing Salem hymns, fading in the wind / please forgive our sins." This is best evidenced on "Rev. Hooper (The Minister's Black Veil)" where he raps about Nathaniel Hawthorne, The Salem Witch Trials, and McCarthyism, tying it all together into his theme of brokenness. While the pleas are earnest and the lyrics compelling, there is one song, "Spectral Evidence," that seems theologically shaky. The central idea of this song is that we climb half-way up to God and He reaches halfway down, when in reality, God meets us where we are and calls us into obedience. That's not to say the song is a bust though because it is filled with thought-provoking lyrics like, "they say time will heal old wounds / but isn't time why every scar receives a name."

On the musical side, McNease has crafted something truly spectacular. With Greg Lafollette on acoustic guitar and Heath singing softly behind a piano, the simple acoustic landscapes the two create leave you hanging on every note. The combination of McNease's gentleness and the slight reverb effect on his voice make for an almost angelic vocal quality, and though it sounds heavenly, some may find it difficult to distinguish the lyrics--especially on "Binx" and the chorus of "Salem Songs." "The only song that breaks from this pattern of soothing acoustic tones is the rap song "Rev. Hooper (The Minister's Black Veil)," on which Lafollette delivers a dirty riff while banging on the base of his guitar as a makeshift percussion.

With beautiful landscapes and intriguing lyrics that will have you reaching for the Google machine for some research, Salem Songs holds up nicely to his stronger sing-songwriter material like The Weight of Glory and The House Always Wins. Time will tell if Salem Songs brings McNease more of the attention he deserves, but probably not before he presents us with another project.