There's a new trend that appears to be forming for each summer in Christian music. And that trend is entitled Seltzer. So this summer the Christian music scene has received the 3rd installment of the the Selzter trend, Seltzer 3, put out by Forefront Records.

Seltzer 3 kicks off with Forefront's own new solo artist Pete Stewart (formerly of Grammatrain). The song, "Don't Underestimate Me" is my favorite of Stewart's, but not the best choice to lead off the project. Audio Adrenaline or the Supertones would probably have been a better choice.

The mix on the album is rather diverse, from pop/rock (Deliriou5?, Considering Lily, Smalltown Poets, Jennifer Knapp), to swing/ska (Supertones, Deluxe Tone Rockets, Five Iron Frenzy, The W's) to rap/soul (Antonious, Prime Minister, Out of Eden/The Katinas). Styles also include punk (Slick Shoes), rock (Bleach, Audio Adrenaline), and dance (Raze). And if you get the album before July 13th, you'll be in possession of a new Raze song off their new album Power which doesn't release till July 13th.

This installment of Seltzer is a great mix and a must for someone looking into Christian music for the first time, or for anyone wanting a good mix disc. 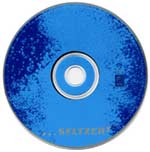