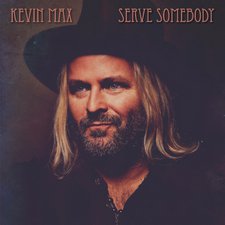 
Kevin Max, the self proclaimed "eccentric" man of Christian music has been hard at work, and the prolific "return of the singer" offers up a covers project full of spiritual songs, titled Serve Somebody. Covering such iconic bands and artists like The Call, Mr. Mister, U2, Rich Mullins, Larry Norman, Bob Dylan, and even Max's former band DC Talk, we hear a Kevin Max that sounds seasoned and as confident as ever in his unmistakably unique voice. The question to be answered with any covers album is, "does the artist walk the fine line of respecting the original version, and simultaneously make it different enough to claim it as their own?" The short answer here is yes, as each arrangement artfully walks this line in a way that only a veteran artist can.

Kicking things off is the song "Let the Day Begin," originally by The Call, and we immediately hear influences of Queen's harmonies as Max sings, "here's to you/my love, my love." Track two is the Mr. Mister song "Kyrie," which is a Greek phrase meaning "Lord have mercy." This song is perfect for Max's voice, and works well coming from him in this stage of life as he looks back on his career up to this point, and looks forward to the b-side of his life. Sounding like he was made to sing it, U2 classic "Pride (In the Name of Love)" comes next, and his voice soars as he sticks close to the original and allows it to speak for itself. Probably the most anticipated track for this reviewer was the cover of Rich Mullin's song, "Creed," and Max does a fine job of honoring one of the late singer's favorite songs. The hammered dulcimer of the original is not present, but the lower register of his voice matched in harmony with his tenor adds a layer of vocal interest. Bob Dylan's "Gotta Serve Somebody" follows, with Max's version amping up the gospel feel from the original all the way to eleven. Max updates the 60's Jesus Music feel of Larry Norman's song "Righteous Rocker" on track six to have more of a rock shuffle with some tasty guitar licks, and it works well with the rest of the album. DC Talk's "Red Letters," from their final studio album Supernatural, is up next and a darker treatment is what results. While he once partnered with his DC Talk mates on this song nearly twenty years ago, he sings it now with an almost desperate conviction that only time and maturity can produce. The musical direction has a more ominous tone, but this version is missing the rock moment in the original version's bridge as Max decides to keep it more low key this time around. Lastly, we get a different more rock oriented version of "Gotta Serve Somebody," which this reviewer prefers. There's just a little more crunch in the guitars than the gospel of the prior track.

The only critique that can be levied at this fine bunch of songs is that many of them have been covered ad nauseam, and even different song choices from the same artists would have been welcomed. However, one can understand why Max decided to cover these particular songs as they each have personal significance to him. Even with that being said, it is a minor gripe, and this is a great offering from Kevin Max fully deserving of your attention. The true cohesion of sound and spiritual themes was clearly well thought out, and the production and mixing of legendary artist and producer John Mark Painter is a highlight as well. If you liked the original versions of these songs, you will find much to like about Max's interpretation of them, and if you had previously never heard many of the originals, he points the way to some potential new favorite artists and songs. This one is not to be missed!

Kevin Max Smith is such an innovator and a prolific artist; it's a shame that he doesn't get the credit he truly deserves as an artist in most circles. Since leaving Audio Adrenaline, Kevin's career has been on overdrive with him releasing new, and different, content on the regular. Serve Somebody is Kevin's second covers project in as many years and far surpasses his remarkable Starry Eyes Surprise. Kevin approaches 7 songs with spiritual leanings from both Christian and secular artists. The EP starts off in impressive fashion with covers from The Call and Mister Mister. While he covers "Kyrie" brilliantly, "Let the Day Begin" is one of the best tracks on the entire project. And while U2 isn't a band that's often covered well, Kevin executes his version of "Pride (In the Name of Love)" flawlessly; it also turns out that his voice is perfect for U2 songs. Rich Mullins' "Creed" is also a nice cover, but Larry Norman's "Righteous Rocker" stands out just a little bit more amongst the two CCM legends' songs featured. In between these two is the first version of Bob Dylan's "Serve Somebody." The "Special Roll mix" is truer to the original, but the "RockN mix" featured at the end of the EP is right up there with "Let the Day Begin" for top track. On both versions of "Serve Somebody," Kevin gets creative with the final verse, changing the original names Bob Dylan used and playfully adds "You can call me Toby" into the mix. The final song included in this collection is one of my personal favorites from dc Talk's final studio album, Supernatural. Kevin redoes this classic dc Talk number and improves on it more than I thought possible. The Serve Somebody EP may very well may be Kevin Max's best recording in a very long history of making music. Sure, the man has excellent original work, but the attention to detail and respect given to these covers is outstanding. This covers EP is one you won't want to miss. - Review date: 7/11/17, written by Michael Weaver