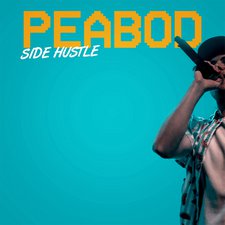 
Last summer, Centricity Music introduced us to acoustic-folk-artist-turned-hip-hop-artist Isaac Peabody, otherwise known as PEABOD. The label had re-released his indie mixtape Healthy Snacks as an official introduction to new listeners, and it was enough to have us coming back for seconds. In November, PEABOD released his first follow-up of new music, a fun Christmas single titled "Neverending Christmas." And since then, the happy-hip-hop artist has released a new single almost every month. The moody and vulnerable "Antisocial" was the first non-seasonal track, releasing quietly in December, and then the rapper teamed with Unspoken frontman Chad Mattson last month for the boisterous "Left Out." This month, PEABOD is back with "Side Hustle," a cheerful anthem for anyone trying to make their dreams and side projects a reality.

If there's one sure thing that can be said about PEABOD is that his songs are hugely relatable. Whether it's the softer "OK" from his debut, or the isolation and transparency reflected in "Antisocial," it's tough not to totally understand what he's talking about. As an artist of the pencil myself, "Side Hustle" is a real struggle (not to mention JFH basically being my side hustle for over 20 years). Whether it's trying to make music while working 9-to-5, writing stories, putting together a film, or even keeping up with making a podcast or vlog, the "side hustle" is something many can associate with. For this single, PEABOD uses his catchy and fun approach to create an anthem that's altogether joyful, enjoyable and memorable. Between rapping about his own struggles working 40 hours and "the extra 45 behind the scenes," and reminding listeners it's "not about the money," he's encouraging his fellow artists and dreamers to "get up and get it." Before the short song ends, he also manages to reminds us it's "all in God's timing," especially when it's easy to get discouraged because "no one is buying."

With each single he continues to release through Centricity, PEABOD is proving he not only has something worthwhile to say, but he knows how to deliver it in an easily relatable and infectious way. The only problem with the delivery of new music as singles is that it's easy to miss them, and ultimately, they leave you wanting more. As of right now, with this being his third new single in four months, it'd be easy to craft a makeshift EP that would lead off with "Left Out," get serious with "Antisocial," and then close with an empowering blast of encouragement in "Side Hustle"-- and it'd still get the job done of making listeners want more. Now, do yourself a favor and get-up-and-get PEABOD's latest songs.