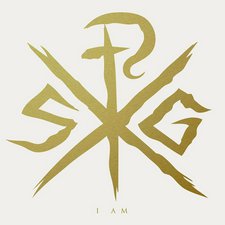 Sleeping Giant
I Am


Back in the early 90s, Christian music started getting its first taste of what would become known as "Spirit-filled hardcore." The scene would be dominated by outspoken, evangelistic Christian bands like Focused, Unashamed, Overcome, and Hopesfall. Although the term isn't really heard so much today, I've found it a very fitting term for the band Sleeping Giant. Using their platform to bring glory to Jesus and spread the Gospel to anyone willing to hear it, the band has been well-loved in the genre. But as they come back home to Facedown Records in 2018, they're giving their fans one last declaration of the worth of Jesus Christ in their final album.

I Am serves as a worthy follow-up to their 2014 beast of an album, Finished People. Everything one could love about Sleeping Giant is present on this album, most notably their Gospel-centered, and oftentimes praise-filled, lyrics. "Preachcore Lives!" is a bit of a goofy song title, but you get the full Sleeping Giant treatment from the get-go, as chugging guitars and pounding drums fill your speakers while gang vocals shout, "Sleeping Giant, up from the underground! We leave behind a legacy of praise! Kingdom over everything!" The song is a heavy and energetic opener, encapsulating the best aspects of hardcore music. You'll find a lot of that here, as the band seems to have written some of their best material, like "Second Chance Kids," "Lantern," and "Fly. Fight. Crow." I Am is full of, not only blast beats and furious guitar work, but also Tommy Green's signature clean vocals and enough slower moments to keep the songs from being one long headbang session.

I'd be remiss if I didn't take a moment to go a little further into "Second Chance Kids," as it's one of my favorite songs on this track list, for a few reasons. First, it's an in-your-face, "I'm not ashamed of Jesus" song that gets the blood pumping. The song begins with Green yelling, "No truce, no compromise, someone gave their life for me, I get it, you better recognize, someone paid the price for me," which is followed by another round of the same lyrics, but this time screamed by none other than Mattie Montgomery of For Today. The chorus is great, too, reminding us that our future is in Christ, and that we don't have to dwell on who we used to be or what we've done: "Leaving our past behind us, no backward glances, now we stand in the glory of our second chances."

Fans of the broader scope of Christian hardcore music will be pleased to know that the guest appearances do not stop at Mattie Montgomery. As Sleeping Giant exists solely to glorify the Lord, all of the guest vocalists are believers, and they all have great things to add to the songs. Silent Planet's Garrett Russell brings a message of Godly social justice to "No Love," Bruce LePage of 100 Demons calls the lost to come to Jesus in "Lantern," and Impending Doom's Brook Reeves joins up in "Reformation" to call the Church to dump stale religion and "live like He lived." The dynamics of having Green's singing and Reeves' deep, growling vocals in the same song is surely not a new thing, but it still sounds fantastic. The most interesting guest appearance here, in my opinion, is that of Demon Hunter's Ryan Clark. Demon Hunter is most certainly a heavy band, but theirs is closer to metal and metalcore than Sleeping Giant, so I would never have pictured the two bands coming together like this. But "Fly. Fight. Crow." has proven me wrong, as the band actually provides a more Demon Hunter-esque backdrop when Clark's screams enter the picture.

Admittedly, my first listen to I Am didn't leave an impression on me. But repeat listens find the album growing on me more and more. Green and the gang didn't hold back for their swan song, providing some excellent hardcore that glorifies the Lord from the unabashed opener "Preachcore Lives!" to the humble final track, "Smashed Upon the Rock." Fans of the band shouldn't be disappointed with this album, and the unfamiliar should familiarize themselves. Thank you, Sleeping Giant, and glory to God in the highest.