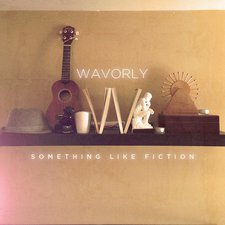 Whatever adjectives one might toss around when trying to describe the Mississippi-based pop/rock quintet, Wavorly, it's probably a safe bet that the word prolific won't figure too prominently in the conversation. Indeed, over the course of their seven-plus years together as a musical unit, front man Dave Stovall and his cohorts managed to eke out only one full-length project, 2007's major label release Conquering the Fear of Flight, and a short, four-song independent EP, four years later. Given such paucity of output, it hardly seems surprising that the Booneville-based fivesome should find themselves perched atop such a trove of unreleased material.

Working, somewhat oddly enough, in reverse chronological order, the 22-track Something Like Fiction collection begins with cuts penned between the 2011 EP and the time of the group's breakup in late 2012. Textbook though it may be, the delightfully yearning indie/power pop number, "If Only You Were Mine," is shot through with an infectiously heart-rending melancholy ("Girl, you're swaying to a lonely beat/ We'd have forever in the palm of our hands/ If only you were mine") and the all-too-familiar sense of urgency that so often accompanies such romantic endeavors. The slightly more atmospheric, and likewise noteworthy, "Chasing After Love" lends the proceedings an engaging Coldplay-esque ambiance. And "Still Standing," which comes across as a sort of kinder, gentler cousin to, say, the Killers' "Read My Mind," rounds things out in suitably fine fashion.

The next fourteen entries, which were birthed during the time between Flight and the EP, are far more variable. The beat-heavy "Hold On" sails along nicely, thanks to its chugging rhythms and lively guest programming by Family Force 5's Solomon Olds. And "Barely Breathe" ("There's something like fiction/ Or just a vague description/ That threw me from knowing who you are") wisely foregoes the quick, easy answers so often lobbed to those undergoing a crisis of faith in favor of something more weighty and insightful. The decided bulk of this second section, though, grinds to a near-halt thanks to its overabundance of aimless, like-sounding songs with only modestly discernable rhythms or melodies. Indeed, many a listener will arguably be hard-pressed to hum more than one or two of these generic, overly-distorted pieces from memory even after multiple listens.

Fiction's final portion, a collection of Flight b-sides and pre-Flight compositions, does manage to slow the mid-album spiral a bit. Trading the alternative and indie stylings of the first seventeen tracks, "Confirmation Brings Sleep" and the interestingly-titled closer, "Well, You've Got My Attention," feature a tighter, more straight-ahead punk-pop groove that works to their advantage. That said, the remaining cuts in this segment exhibit the same meandering quality that submerged Fiction's middle part. And, taken on their own merit, even "Sleep" and "Attention" pale next to the average work from punk-pop purveyors like Fireflight and Dizmas, both of whom the band toured with not long after these last few tunes were first committed to tape.

To be fair, a certain amount of roughness around the edges is to be expected given that Something Like Fiction was never mixed, mastered or otherwise retrofitted for wider distribution. Likewise, the very exclusion of its contents from the band's officially-released output shows that, at the very least, the Wavorly cooperative exhibited an admirable sense of wisdom and restraint when it came to sifting through the available material for Conquering The Fear of Flight and the extended player - both of which, it should be stated, are superior to this compilation. Perhaps most encouragingly, the fact that the first three songs are the most convincing moments on the anthology means that, at the very least, Stovall and his companions went out on a high note. Impressive (in the relative sense) as they are, though, they still aren't sufficient to tip the scales in favor of this generous, yet uneven, parting compendium, which remains the domain of die-hard devotees and completists only.

Wavorly's last act before throwing in the towel was to pour all their unreleased work over their career into one massive project dubbed Something Like Fiction: The Lost Album(s). This alternative rock release features 22 songs; the best of which begins early before fading into the band's more dated and unproduced music. The first several songs sound great and could have easily been added to the band's 2011, self-titled EP to form a full-length album. "Chasing After Love" and "Never Left My Side" are strong pop rock tracks while "Never Left My Side" features the edgy rock sound prevalent on the band's debut album, Conquering The Fear Of Flight. Once the thoughtful rock tune "Rumours Of Wars" rolls around, the production value of the project drops and all the B-sides afterward are affected. Although Wavorly fans will appreciate owning everything on the Lost Album(s), there isn't much reason to revisit the second half. It is interesting to note that the more recent Wavorly songs reflect an emphasis on our horizontal relationships while the latter half is more spiritually focused. A minor profanity also appears on "If Only You Were Mine" ("To hell with all the things they say"). There are some good, if not great, songs on the first half of Something Like Fiction, and it's clear Wavorly had plenty of talent and songs left in them. It's just a shame they were forced to disband. - Nathaniel Schexnayder, 6/11/13