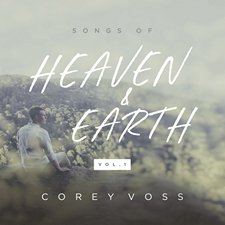 
The second release from Corey Voss, a worship leader at Gateway Church in Shelbyville, Tennessee, follows on the heels of 2015's How Great, which was also an EP-length live worship project. "The King Is Here" kicks off the sophomore record with a sort of Hillsong United-meets-early-U2 vibe (think the former covering the latter's "Where the Streets Have No Name") that elevates the pleasant pop tune ever so slightly above the average pop/praise-based offering found on inspirational radio. The momentum created by the opening track, however, is quickly quelled by the trio of cuts that follow, none of which do much to distinguish themselves from the majority of the singles that make their home in the present-day Christian Hit Radio Top 20.

In his defense, Voss shows himself more than capable of crafting impressive, classic-sounding lyrics, as the simple, but memorable wording of "Canyons" ("Take me higher than the angels fly/ Where there's freedom in the open sky/ And my hope will never cease or die") so ably demonstrates. And the semi-epic aesthetic of the sweeping and melodic best-of-album entry, "Don't Ever Let Me Go," ends the proceedings on a decidedly high note. But, while the first and last tracks inarguably offer glimmers of hope amongst their more generic counterparts, they also serve to make Songs of Heaven & Earth a sort of book-ended affair: strong at both ends, but weak in the middle.

Fans of radio-based artists like Casting Crowns, Chris Tomlin, et al, will surely find Voss's latest effort to their liking. And the sturdier numbers do much to suggest that, should he decide to release a follow-on effort made up completely of cuts like "Don't Ever Let Me Go" and "The King Is Here," he could well be an artist to watch in 2018. As it stands, though, his current album is still recommended only for Voss devotees and existing fans of the genre within which he practices his craft.