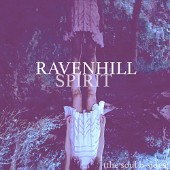 
Since the release of their label debut, Soul, the Nashville-based southern rock band Ravenhill has maintained a rather quiet presence on the web. Between playing some shows and doing a few podcasts, the band has [almost secretly] been working on some new tunes. In addition to a reported deluxe edition of Soul, the beginning of 2018 saw the surprise release of a new EP, called Spirit.

Much like our spirit and soul are connected, so are Ravenhill's Spirit and Soul. This EP contains six tracks, but four of them are "Sweetwood Versions" of songs from Soul. Named after the street where the songs were recorded, it represents a very stripped down listening experience when compared to the original versions. While this might also make for an interesting listen, particularly for those familiar with the originals, they're actually very pleasant to listen to. Even "You'll Go Far Boy" - a full-out rock jam in its true form - sounds great slowed down, minimized, and shaken to its core. Perhaps the best of the Sweetwood versions comes at the very end of the EP. "Blood on the Church Floor" tells a haunting tale of the persecution that Christians in more hostile areas face; torture and martyrdom because their faith is illegal, yet still so worth it all. Despite the blessedness of dying for Jesus, the fact that there is such persecution in the world is unsettling. This song is a reminder of that, and the more serious, darker tone of this reimagined version only makes it more chilling.

The two new songs here are great additions that get me pumped about the possibility of more Ravenhill soon. "BloodWater" and "Brooklyn Blackout" are traditional Ravenhill rockers that, quite honestly, probably would have fit better at the beginning of the tracklist, but still feel like welcomed additions just where they are, and the sound of each represents a different side of the band: the dramatic and the carefree. "BloodWater" opens with a terrific bass riff and features a very nice sounding choir of children singing some of the melodies. The choir is probably one of my favorite things about any of Ravenhill's music thus far. "Brooklyn Blackout" is an upbeat track that lead vocalist Josh Clifton says was written while listening to The Gaslight Anthem. Stylistically, it falls somewhere between Flatfoot 56 (sans bagpipes) and Social Distortion.

Ravenhill's Spirit EP is a great addition to the band's discography. The guys have a strong chemistry and a great ear for alternative and southern rock, and they have yet to disappoint. However, I'm hoping that Spirit is merely an hors d'oeuvre with the main course coming shortly thereafter. You can get a free download of the whole EP right here while it's available, or you can pick it up at your retailer of choice. Either way, make sure to check it out.